Read Along with Faye: An Ember in the Ashes by Sabaa Tahir 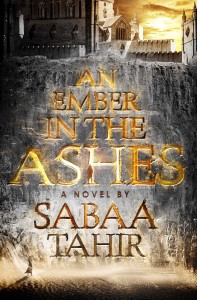 As someone who works in the publishing industry, I know a few things about what it takes to make a big book. Particularly, a big, popular, bestselling YA book. Have a fast-paced, competently plotted manuscript. Include elements that are immensely popular at the time: dystopias, revolutions, mythical creatures, love triangles, school stories, settings in Ancient Rome or Ancient Persia, athletic tournaments, an “edgy” quality. Have a spec’d out, shiny, eye-catching cover. Take an engaging author, and put her in front of gatekeepers and teens. Send plenty of early copies out for review. Time those ads, promotions and media pitches. Get buy-in from major accounts. Make sure that around the time of on-sale, anyone interested in YA, fantasy, or buying books sees this book everywhere.

I saw An Ember in the Ashes everywhere when it first came out. The book is wildly successful, with healthy sales, widespread media coverage, a full trilogy planned, and a movie deal. It is good to muse on why certain books do so well, so that the success can be replicated for other books. But this is, alas, not a campaign analysis. It’s a review.

I can easily see the strengths of An Ember in the Ashes: I read it in one huge gulp, eager to keep flipping the pages and find out what happened next. At the start of the book, Laia’s family is murdered and her brother is taken to prison; in order to save him, she ends up spying on the most ruthless, dangerous person in the empire—the Commandant, the head of the military training academy—who maims loved ones to discipline those who displease her. Despite my general indifference towards reluctant heroines, I like that Laia’s resistance isn’t flashy nor does she have any experience whatsoever at spying—she’s no Alianne of Pirate’s Swoop. She is insecure about her abilities, yet does everything she can to survive. Laia’s relationships, too, with her fellow slaves Izzi and Cook, are refreshing.

But, as someone who has read a lot of fantasy, a lot of YA, and a lot of fantasy YA that has this book’s basic premise, it’s disappointing. Absent are worldbuilding details that go beyond surface-level, most notably linguistic ones: The Martial Empire conquered the Scholar people (those are the names in the book), with a glimpse of tribes and magical creatures such as djinn, efrits, and ghuls; the military academy’s name is Blackcliff, there’s a character named Keenan. I know the Roman Empire reached the land of the Celts, but this struck me as far more modern than the historic era presented in the book. Absent is a consideration of technology—we know the Martials have steel, but that’s about all. Magic exists only to serve specific plot points or to deus ex machina a way out of a tricky situation. Absent, too, is a thoughtful contemplation of colonialism, and how resistance movements might actually gain steam and succeed.

But perhaps, I’m completely mistaken. Perhaps, you could argue, the main audience for this book doesn’t care about these details. But, as a reader who sees An Ember in the Ashes widely lauded for its worldbuilding, I think teens can and do recognize these failings. It bothers me when people cast down YA fantasy for being more simplistic and less rigorous than adult fantasy, with worldbuilding just the backdrop for the kissing, the angst, and the feelings.

I won’t even begin to touch on the eyeroll-inducing romantic subplots, particularly the—what does one call this? A love parallelogram?—where there are two simultaneous love triangles involving the two main characters. What troubled me most is the constant threat of violence against women, so ubiquitous that it practically becomes background noise, and the suggestion in writing by a sympathetic character that a girl’s chances of getting raped are directly correlated to how attractive she is. Contrasted starkly with the rather chaste romantic developments—there’s some dancing, and one consensual kiss—it leaves the reader with absolutely no examples of sex-positivity in this book.

Finally, as much as I did like elements of Laia’s point of view, An Ember in the Ashes also features the perspective of Elias, a privileged guy and the eventual love interest. I do think Tahir succeeded in that she captured Elias’s melodrama and whininess (really, he thinks that absolutely no one else in this rigid military academy thinks the way he does?) to a tee. The problem is, I think the reader is supposed to like him, and I would have much preferred his best friend Helene’s narration. As racist as Helene is, you don’t get to be the only girl in a generation to train at this fancy military school and not question some stuff, even if your one big failing is falling in love with an anguished privileged dude who thinks only he can save the Empire.

For me, there are too many books that do this age group, genre, and premise better. I recommend turning to Kate Elliott’s Court of Fives instead, which didn’t break out in the same way but improves on my complaints in An Ember in the Ashes on nearly every count. But I’m only one reader, and given the immense success of these books, there are plenty of readers who disagree.

Next month’s book: Poisoned Apples: Poems for You, My Pretty by Christine Heppermann