Book Club: Like Water for Chocolate by Laura Esquivel

Posted on September 14, 2018 at 9:00 am | Comments Off on Book Club: Like Water for Chocolate by Laura Esquivel 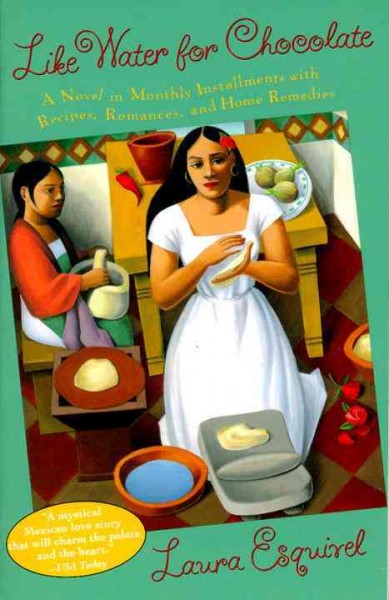 In 1989, when Like Water for Chocolate was first published, I was 13. I was reading my mother’s mysteries and bodice rippers, where the girls were either, respectively, dead or had to be told how much they wanted sex. I was consumed with my own perfectionism and already worried about achieving perfect grades, perfect attendance, and perfect extracurricular activities in high school, which I wouldn’t even start for another year. I did not read Like Water for Chocolate when it came out.

But maybe I should have.

In certain Spanish-speaking countries, the phrase “like water for chocolate” means “furious.” Often, in those countries, hot chocolate is made with near-boiling water, so the simile is, essentially, so mad that one is boiling over, rage-filled, livid. And Laura Esquivel’s book is so much like water for chocolate: a scalding, blistering work of fiery passions and violent anger and ultimately, literal conflagration.

Widowed Mama Elena has three daughters: Gertrudis, Rosaura, and the youngest, Tita. Like Water for Chocolate is Tita’s story, born of Mama Elena’s insistence that, as in family tradition, Tita never marry and instead stay home to take care of her mother. As with life, instead, Tita is the first of the girls to fall in love, instantly and fervidly with Pedro, who promptly appears in Mama Elena’s living room to ask for Tita’s hand in marriage. Mama Elena refuses, of course, and instead offers Rosaura to Pedro, who…accepts. Pedro’s reasoning is that, by marrying her sister, he can be close to Tita. Tita is predictably heartbroken and bakes her sorrow into Rosaura and Pedro’s wedding feast, causing sickness and, ultimately, a magical realism river of vomit.

Like Water for Chocolate, while purportedly told in monthly segments full of recipes and cooking tips – as befits Tita’s passion for cooking – in fact covers over 20 years of Tita’s life: her love of Pedro; Gertrudis’s escape from the household (another magical realism moment of unquenchable passion that culminates in a naked race into the desert and sex with a stranger on a horse); Mama Elena’s death (and haunting of Tita); and finally Tita and Pedro’s eventual consummation of their passion, only to have Pedro’s orgasm cause his death – upon which Tita, unwilling to let him go, creates her own death, burning the ancestral family ranch to the ground in the process. Does that sound like a lot? That’s not even the half of it!

Like Water for Chocolate is, even more than Tita and Pedro’s story, Tita and Mama Elena’s. Tita is, fundamentally, a creature of her mother’s making: selfless, abused, oppressed, a perfectionist. The first story in the book is about Mama Elena refusing Tita’s heart’s greatest desire, not because Tita is too young or even that Pedro isn’t suitable, but because Mama Elena wants someone to cook her food, draw her baths, and care for her ranch. Like Water for Chocolate is a slowly accelerating burn, lit when Tita is refused Pedro. The book is Tita’s, as she discovers her agency and how to use it, but every action she takes is in reaction to her mother, her mother’s literal ghost, and her mother’s legacy in Rosaura’s beliefs about marriage, dignity, and eventually, her own daughter staying home to care for her.

Like Water for Chocolate is that book. It’s about a daughter’s journey as a reflection of her mother’s influence. It’s about finding her own agency and her own path–but always in reaction to what she learned from her mother. Tita’s situation is perhaps extreme–as Esquivel likely intended–but even without violence or a boyfriend given to a sister or a ghost, her story will be so familiar to so many of us because Tita’s story is, ultimately, about her boiling point: her rage, her passion, her reclamation that, in the end, is all about burning it all down.

I didn’t read Like Water for Chocolate at 13, but maybe I should have.

Like Water for Chocolate is a quick read. Twelve chapters, one for each month of a figurative year, each with a Mexican recipe important to Tita’s life. Esquivel is primarily a screenwriter, and it shows, as the book does a lot of telling rather than showing. If it were a longer book, perhaps the writing would be a more significant deterrent, but at a very quick 250 pages, it’s worth the time, if only for a moment of contemplation on how much of what we do, even today, is in reaction to our mothers.