Welcome back, Sirens! We have brilliant 2019 Guests of Honor to introduce you to, Sirens Studio summaries and faculty bios are up on the website (get your tickets!), we’re busy reading fantasy books.

And let us reintroduce you to our 2019 Guests of Honor: Mishell Baker (Borderline), Ausma Zehanat Khan (The Bloodprint), Rebecca Roanhorse (Trail of Lightning), and for the first time at Sirens, a scholar, Dr. Suzanne Scott (Fake Geek Girls), and a Sirens Studio guest of honor, Roshani Chokshi (Aru Shah and the End of Time). We’ll be speaking to each of them in the coming months about their work, fantasy literature, and heroes, but get a head start reading their work here.

Pencils ready? Sirens Studio summaries are live! Here is the list of faculty with their topics for reading, writing, and career intensives:

You’ll want to nab Studio tickets soon, since we’re limiting the attendance to 70. Read the full summaries and faculty bios over on the Sirens Studio page! 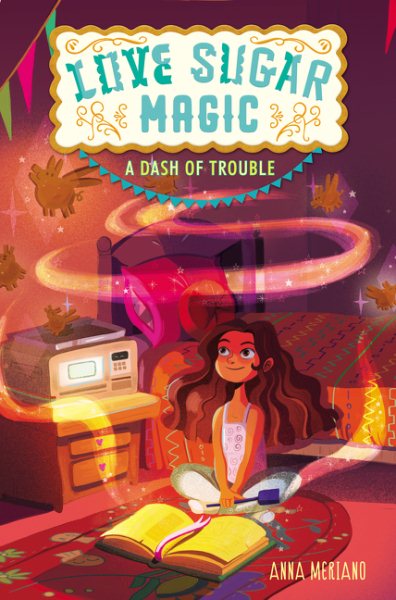 Amy generally reads upwards of 150 books a year, and through the monthly Sirens book club, she shares her insights, opinions, and a teeny bit of her personal reading history. This month, she was smitten with Anna Meriano’s chapter book, Love Sugar Magic: A Dash of Trouble: “Please, fantasy authors… Give me more women with big business dreams and big family dreams and big dreams that they’ll achieve through hard work and smart business and just a bit of magic.” Read her full review on the blog and on Goodreads.

In February, we’ll have information on how you can apply for Sirens scholarships, Sirens co-founder Amy Tenbrink’s thoughts on our 2019 “heroes” theme, preliminary information about Sirens’s programming (which is presented by attendees!), and more.

Book Club: A Dash of Trouble by Anna Meriano

So often, fantasy books—even feminist fantasy books—are about women claiming men’s power. Seizing a throne held by a man, perhaps. Cutting down a sword wielded by a man, often. Sorcery taught by a man, sometimes. Dominance stolen from a man during sex, occasionally. As if power comes only in masculine forms. As if in order to gain power, we must rob men of theirs: take their leadership, their weapons, their knowledge, their seed. As if the only path to power is the one they chose, they covet, they permit.

And that’s all fine, I suppose, though not nearly enough attention is paid to breaking down those particular patterns in fantasy works. But I frequently grow weary of those same tropes, those same plots, those same imbalances and authorities and uprisings.

Which is to say that I have a soft spot for fantasy books about traditionally feminine skills made magic. There’s something compelling about taking our foremothers’ crafts—baking, singing, knitting, and thread-spinning—and rendering them magic. It’s a ready metaphor for claiming our stories and our power, not in traditionally masculine ways, but in the traditionally feminine ways we have always used to survive: through sisterhood and secrets and a damned good loaf of bread.

(Side note: You can imagine the incandescence of my rage when these books about traditionally feminine skills made magic feature a male protagonist mastering those skills to save a damsel in distress. But that is a whole different book review or twenty.)

Anna Meriano’s A Dash of Trouble, the first book in her Love Sugar Magic series, overflows with brujería de la cocina. Leonora Logroño’s family owns the most beloved bakery in Rose Hill, Texas. And from the first chapter, the book gathered me up with scents of cinnamon and cardamom and baking bread and sugary cookies—not to mention the fact that Leo’s mom is the businessperson of the family, the one working, working, working to achieve her dream of owning a larger house down the street from her Amor y Azúcar Panadería.

People, I was smitten.

Eleven-year-old Leo is part of that family of big dreams, the youngest of five sisters—and her frustration is palpable: She’s the youngest, the one with the fewest freedoms and responsibilities, the only one who isn’t fluent in Spanish, the one who has to go to school while everyone else gets to stay home and prepare for the bakery’s Day of the Dead celebration. Even as she clings to her much-loved childhood traditions, like dressing up for Halloween, she wants so badly to be grown up, to be taken seriously, to have responsibilities equal to her older sisters, and to be part of whatever secrets her family is telling in Spanish.

So she does what any eleven-year-old protagonist full of curiosity and vexation would do: She sneaks out of school to spy on her family. Leo has more than a dash of Claudia Kincaid and Trixie Belden.

What she discovers through her spying is her family’s magia: The women of her family, including her four older sisters, are brujas: They can influence emotions, make objects appear from nowhere, and commune with the dead. And all those “lucky” cakes that Amor y Azúcar Panadería sells? Well, they really are lucky.

A Dash of Trouble deftly navigates all those minefields of being eleven. Of still finding comfort in rituals and objects that you increasingly see as babyish. Of wanting to be given more responsibilities and more freedoms and more independence. Of just knowing that you can tackle anything, solve anything, fix anything—until you can’t. Of walking that tightrope between being a little kid and growing up, even as those who know you best don’t even notice that you’re bigger and braver and bolder than you were even last week. Of learning what responsibility really means, and what being a good friend and a good daughter really means, and what fixing your mistakes really means, even among a series of truly unfortunate events.

What I loved about this book—even more than its baking magic, even more than its panadería-jefe mom—is how active Leo is. Things don’t happen to Leo; she happens to them. She makes decisions, good and bad: She sneaks out of school, she convinces Caroline to cast spells, she fixes her own messes (with a bit of help from her dead abuela). Leo is a girl who gets shit done. And when you get to the big showdown between Leo and her mom, after her mom unravels everything that’s happened, Leo’s mom is equal parts exasperated that Leo didn’t tell her before and proud that Leo was independent enough and resourceful enough and determined enough to fix her own mistakes. Leo is more than my kind of heroine: She’s the sort of heroine that I give to my seven-year-old niece as she learns to navigate her independence and her mistakes and her power.

We’re excited to bring you a roundup of January 2019 fantasy book releases by and about women and nonbinary folk. Let us know what you’re looking forward to, or any titles that we’ve missed, in the comments!