Iron Cast’s heart is the friendship between two girls who are inseparable, who are better together than they are apart

Posted on August 16, 2019 at 9:00 am | Comments Off on Iron Cast’s heart is the friendship between two girls who are inseparable, who are better together than they are apart 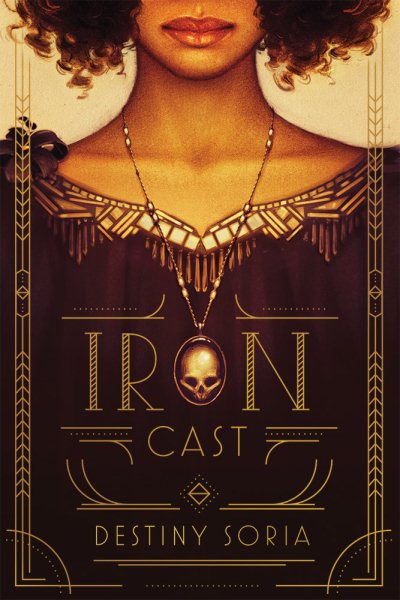 In 2012, I read Code Name Verity by Elizabeth Wein and it shredded my heart. If you haven’t read it, you must, and then we will have shredded hearts together.

It’s a story of two girls, best friends, during World War II. One, a pilot, drops the other, a radio operator, into German-occupied France. Things end terribly.

I still, seven years later, burst into inconsolable tears at the thought of “Kiss me, Hardy! Kiss me, quick!”

Code Name Verity—despite my permanently shredded heart—is one of my favorite books in this history of the universe. It’s my heart book, the one that’s not for my head and not for my soul and not for my fearlessness or my ambition, but for the part of me that loves my best friend more than anyone else. Because Code Name Verity is nothing more and certainly nothing less than a story about the profound strength and depth and sacrifice of female friendship, which is a wondrous declaration in our world that doesn’t much consider or value or even like the idea that women might be friends.

So it is no small thing when I say that Iron Cast by Destiny Soria has patched up the tiniest bit of that gaping hole that Elizabeth Wein left in my chest seven years ago.

It is Boston, 1919, on the verge of Prohibition, and two best friends work in a night club doing illegal magic. Ada Navarra, the biracial daughter of immigrants, is a songsmith, able to conjure feelings with music. Corinne Wells, white daughter of a rich Boston family, can create illusions by reciting poetry. Both are hemopaths, people whose abilities are possible through their unusual blood. But that blood also makes them vulnerable to iron in always painful, sometimes life-threatening ways.

And in Boston, in 1919, hemopaths aren’t welcome. While a number of hemopaths use their skill seemingly innocuously, such as playing happiness or conjuring a pastoral vision for paying patrons, others use their skill to commit crimes, manipulating unsuspecting marks into scams and robberies. Ada and Corinne do both, though they’ll pertly tell you that they take advantage of only those who deserve it, thank you very much.

The city has recently passed a law prohibiting hemopaths from using their skills, and clubs like the Cast Iron, where Ada and Corinne work, put on secret, illegal hemopathy shows for patrons. Police carry iron hemopath detectors and hemopaths are frequently rounded up and placed at the Haversham Asylum for Afflictions of the Blood “for their safety”—but in fact for extensive, deadly experiments attempting to find either a cure or a protection for non-hemopaths. In fact, Iron Cast opens with Ada in the asylum, waiting for Corinne to break her out.

The plot of Iron Cast is, loosely, what you might expect from a magical Prohibition-era, speakeasy-style novel. There are some guns and some drinking and some dancing and some kissing. Because this is a fantasy work, there are also some magic and some revelations about some magic.

But Iron Cast sets the table with more than suits and hem lengths, jazz and champagne. In a thousand ways, some tiny and some monumental and some both tiny and monumental, Iron Cast is about what it means to be something other than what society privileges: to be a different color, to love someone of your own gender, to be able to do magic because of your iron-hating blood. It’s about courage and equality and doing something instead of standing idly by. And if Iron Cast sometimes feels a bit too pat, such as when Corinne learns that her mother is a closet Marxist who knows all about Corinne’s hemopathy, well, it feels too pat in that way where the universe bends ever-so-slowly toward justice.

And Iron Cast’s heart, which is not shredded at all, is the friendship between Ada and Corinne. Two girls who are inseparable, who are better together—at magic, at ambition, at boys—than they are apart. Two girls who encourage each other every day to be smarter, quicker, more ambitious, more relentless. You’ll love them both and you’ll love them both better because you get to see each of them through the other’s eyes: Corinne’s bravery, Ada’s intelligence, Corinne’s mouthiness, Ada’s kindness toward her mother.

And when Ada does something for Corinne late in the book, it will remind you so very much of Maddie and Queenie from Code Name Verity, and your heart will break—but this time everything comes out okay in the end and that happy ending patched up a tiny bit of my forever-broken heart. And if I skipped ahead to make sure that Iron Cast had a happy ending, well, a girl can only take so many heart-shredding best friend stories.