Posted on September 6, 2019 at 9:00 am | Comments Off on This is How You Lose the Time War is for anyone who has ever been bewitched by the magic of letters

The Sirens Review Squad is made up of Sirens volunteers, who submit short reviews of books (often fantasy literature by women authors) they’ve read and enjoyed. If you’re interested in sending us a review to run on the blog, please email us! Today, we welcome a review from Lily Weitzman on Amal El-Mohtar and Max Gladstone’s This is How You Lose the Time War. 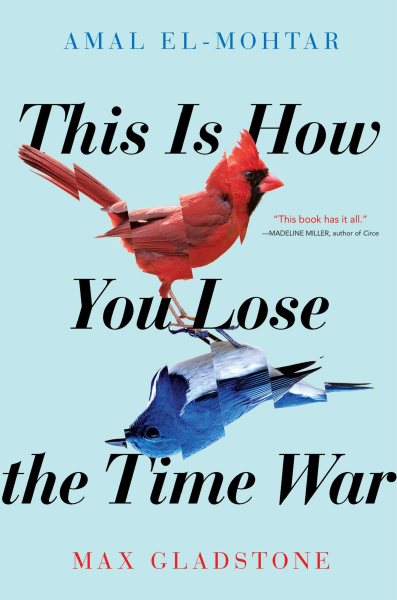 My last semester of college, I took an elective called Great Letters. All about the art and history of correspondence, it sparked a love of letter writing. For several years after college, I corresponded via snail mail with any friend who would put pen to paper. This year, in an effort to regrow friendships after an isolated winter, I decided to start again. On a warm spring day, I took some stationery to a nearby park, picked a bench, and wrote a letter to one of my oldest friends.

It feels only right that I returned to letter writing shortly before reading This Is How You Lose the Time War. This is a book for anyone who has ever been bewitched by the magic of letters.

This Is How You Lose the Time War is an epistolary spy-versus-spy romance co-written by Amal El-Mohtar and Max Gladstone. Red works for Agency and Blue for Garden, agents on opposing sides of a war spanning space and time. Red and Blue begin leaving letters for each other, at first taunting but soon growing profound as the two women fall in love.

That, of course, is just the set-up, even if it is an intriguing one. That is just what the book is about, not how it feels at its core. And This Is How You Lose the Time War feels profound, beautiful, and magical.

This is a book that is unapologetic in its beauty, its intelligence, and its openness. Its language is lyrical and poetic, though never in a way that makes it too dense or difficult to read. And El-Mohtar and Gladstone’s voices work well together, as she pens Blue’s sections and he Red’s. The epistolary form gives both authors and characters the freedom to explore big questions and revel in glorious language. And the ways Red and Blue find to write each other are wonderful, from words grown into tree rings to a bee dancing out a message.

And while it is soaring and romantic, This Is How You Lose the Time War is also gloriously fun and funny. It revels in wordplay, from a pun on wax seals to the new ways Red and Blue address each letter. With all of space and time at its disposal, the book is not shy about referencing song lyrics or recommended books. These references made me feel more seen as a reader as they worked their own form of time travel: A line from a folk song brought me back to the college dorm where I first learned it, and a reference to an earworm had me groaning in recognition. (Said earworm may get stuck in your head; it’s worth it.)

While this story is labeled science fiction for the time travel and Red’s techno-society Agency, there is just as much a feel of fantasy, especially in the ways Red and Blue find to correspond.

And the time travel, which is usually a hard sell for me, works. So often, time travel is employed in ways that make the logical part of my brain hurt. Not so here. The narrative travels lightly over the workings of time travel so it can better dwell in its possibility. The work of these two agents recognizes the grand scope and infinite complexity of a conflict across space and time. To win a time war, it is just as important to send a doctor to visit her relatives as it is to point an army toward victory. With so many threads of time at play, there are endless narrative possibilities—and as enemy agents fall in love, their ability to recognize new possibilities is all the more important.

The imagery—timelines as threads, Red traveling upthread, Blue braiding strands—is a delight. All the more so for embracing the language of traditionally feminine arts. Similarly, it is a joy to read these two women proclaiming confidence in their skill.

It turns out that letter writing and time travel go together perfectly. As Red points out, letters are their own form of time travel. Each one captures a moment in time, preserving it to be read in the future. And, as I learned in that college class, letters are a format that lends itself to honesty and openness. Strong bonds can form between correspondents. Red and Blue write each other truths. They explore what it means to hunger, to seek, to be seen. That, perhaps more than anything, is the great joy of This Is How You Lose the Time War: two women speaking to each other, sincerely and unreservedly, across all of space and time.

Lily Weitzman is a programming, outreach, and communications librarian at the Public Library of Brookline, MA. That means that on any given day, she might be found leading a poetry reading group, managing the science fiction and fantasy collections, teaching technology skills, or helping you find the title of that book you heard about on public radio. She has previously worked on a Yiddish oral history project and volunteered as an aquarium educator. Outside the library, Lily chairs the Yiddish Committee at Boston Workers’ Circle.