We’re pleased to bring you the fourth in our series of candid, in-depth interviews with this year’s Sirens Guests of Honor, covering everything from inspirations, influences, and research, to the role of women in fantasy literature, and discussing our 2021 theme of villains! We hope these conversations will be a prelude to the ones our attendees will be having in Denver this October. Today, Sirens chair Amy Tenbrink speaks with Dr. Kinitra D. Brooks.

AMY TENBRINK: Let’s start big: You’re a black woman horror scholar and your work to date centers around the idea that black women genre writers transgress: They purposefully blur the lines between fantasy, science fiction, and horror in order to create a work that recognizes and respects their blackness, their woman-ness, and often their queerness. What about your work excites you? What challenges you? Where do you hope this field goes over the coming years? 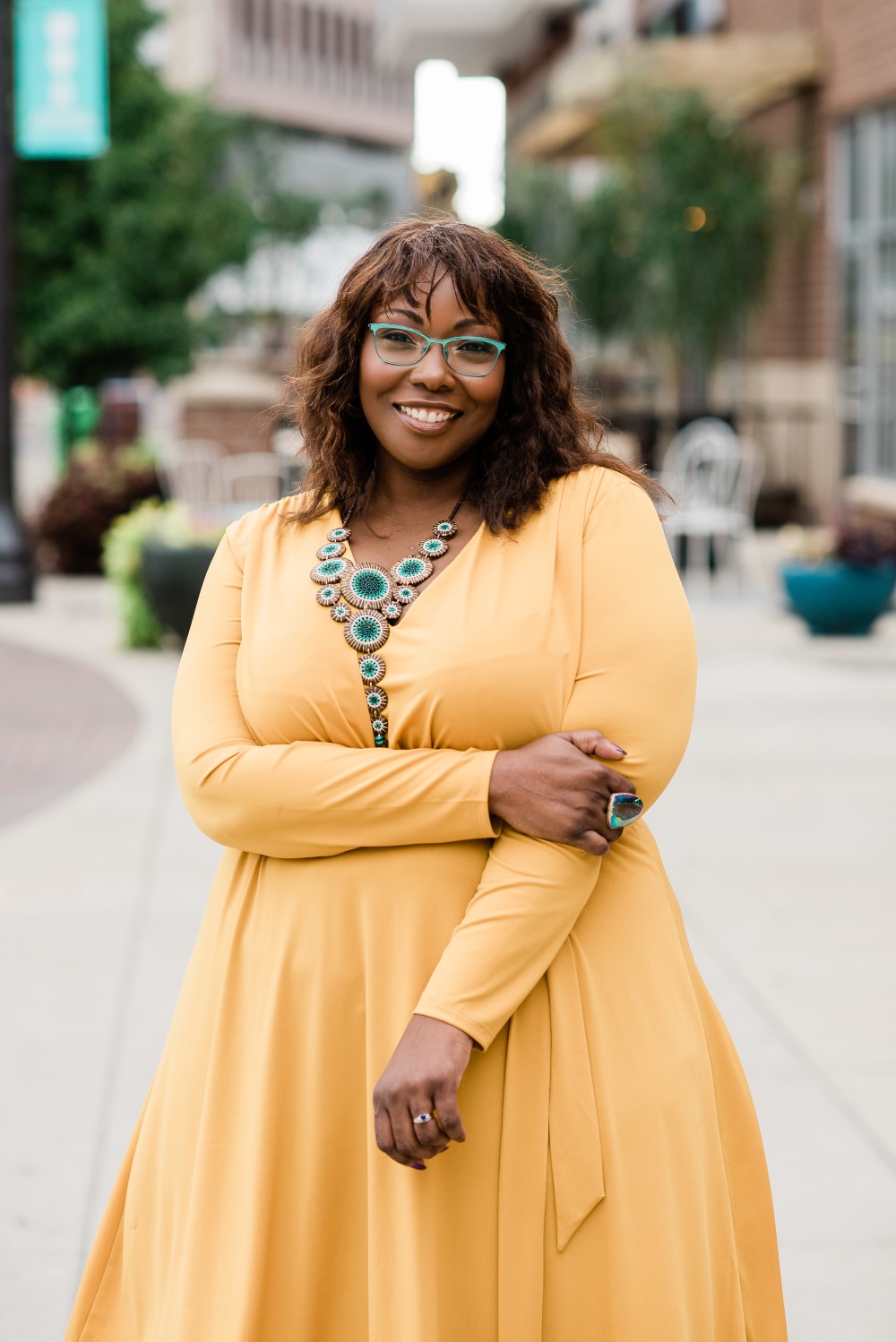 KINITRA BROOKS: I love showing the breadth and depth of what black women writers can do. Sycorax started when someone told me, “Black women don’t do horror.” Their statement was so ignorant, and they said it with such self-assurance, that I knew it wasn’t worth it to argue with them in the moment. But it did clue me in to the unfortunate reality that folks somehow thought black women were bereft in an area I knew they were not. I became a horror fan because of the weekends I spent watching awesome 70s/80s horror, cyberpunk, and fantasy films with my Aunt Linda and Aunt Errolyn.

So my book wasn’t so much about that one ignorant person but about the presence of my Aunts. It was giving voice, insight, and space to the women in my family and other black women like them: Hardcore fans of horror, sci-fi, and fantasy films. These women not only introduced me to genre, they are responsible for my love of it.

I hope the field expands the definitions of what is considered horror because it acknowledges and appreciates how black women don’t simply break the rules, they create their own.

And no one proves this more than Zora Neale Hurston. There are new levels of her genius revealed every decade we study her work. I consider her one of the first horror writers because she transcribed the Devil and Haint tales of Southern Black oral culture.

My work excites me because not only am I discovering new texts and contexts for black woman genius—I’m also blessed with the opportunity to geek out at the same time. My work is hitting its stride during a virtual renaissance of black woman speculative writing.

AMY: In Searching for Sycorax, you quote Nnedi Okorafor, whose work you’ve reviewed for the Los Angeles Review of Books, as saying that “there is a method, purpose, and realness to my madness. It is not fantasy for fantasy’s sake.” What do you find is the method, purpose, and realness to the use of what you term “fluid fiction,” works spanning a number of speculative genres, by black woman authors? What does the speculative space provide them?

KINITRA: Black feminist theory centers itself on the lived realities of black women that are often constrained by the simultaneity of their oppressions—race, gender, class, and sexuality—and that they are all interlocking but also shifting in form and effect. But just as these simultaneous oppressions attempt to constrain, they certainly don’t govern the lives of black women because of our ingenuity. One of the examples of this genius is fluid fiction. Black women creators are constantly oscillating, changing shape and form as they erase and willfully ignore the boundaries of genre—be it science fiction, fantasy, horror, romance or even family drama.

This fluidity is incredibly intentional and reflects black women’s refusal to be defined and imprisoned by the differing identities they possess—be it their gender, their race, their sexuality, or even their class status.

AMY: In Searching for Sycorax, you also explore the construct of folkloric horror, a subgenre of speculative work employed by black women to fuse and explore natal African religions, such as Vodou and Santería; the concept of spiritual possession as a valid ontology; the spiritual bildungsroman; and the realization and celebration of the black spiritual woman (e.g., the Mambo, the Santera, the Obeah woman). There’s a lot here—people should go read your book!—but perhaps you could share why these particular elements lead to folkloric horror as opposed to simply folklore.

KINITRA: This goes back to my insistence that black folks have been creators and fans of horror for a long time. That so often our horror lies in our folklore—the oral tales Zora Neale Hurston transcribed almost a century ago. We have long reveled in the macabre.

So there is something about the horror of black reality vis-à-vis slavery and other systems of oppression through the diasporic experience that has forced us into simultaneity of being both the victimized and the monstrous in unique ways. In many ways, not facing that history as a non-black person is also willful, full of erasure and a lack of accountability. For black women in particular to want to dig deep into that horror and to bring it forth in imaginative ways that push the bounds and depths of what is considered horrific—remains incredibly powerful.

But I also wanted to highlight the subversion and the pushback. Folks didn’t think we worked in horror because they are unable to read black women and the many cultures we create and participate in. We are illegible to those who traffic in hegemonic ideals.

The illegibility becomes clear when examining the problematic nature of the historical constructions of black women—and black folks as a whole in horror. Again, we make our own rules.

So the horror of the Vodou zombie—which was actually a medical coma folks were placed in so their bodies could heal—as the living dead is a complete misreading of our folklore. We do, in fact, have the living dead in our culture. But they are our ancestors, those who have transitioned to the ancestral plane yet live with us in our homes and actively participate in our daily lives. Do you see the illegibility? Do you see how it’s willful?

Folks fail to make the effort to truly know the complexities of black women because they mistakenly believe we are so knowable.

AMY: The 2021 Sirens theme is “villains,” and I imagine a black woman horror scholar has something to say about that. What does “villain” mean to you—especially in the field of consumption and criticism of speculative works—and how is that entangled with gender, race, and sexuality?

KINITRA: Great question. I simply don’t believe that villainy can or should be embodied by one person. Villainy lies in the power of oppressive symbols, the long histories of evil-doing that grows exponentially and infects everything. Villainy is whiteness. Villainy is patriarchy. Villainy is the purposely constructed existence of poverty. Villainy is homophobia. True villainy is represented in those things we can’t easily kill. It takes generations of knowledge to battle generations of evil-doing. This ain’t a fair fight, so why are we trying to fight fairly?

AMY: In Searching for Sycorax, you confess that for all your love of horror, your favorite subgenre is the zombie apocalypse. What is it about zombies that’s so compelling?

KINITRA: I love that zombie horror is totally not about the zombies. They are an initial threat but it’s about human nature and the psychological terrors waged by and inflicted upon the surviving humans by the other surviving humans. It’s about the generations of evildoers continuing to wage a campaign of evil.

Also, if we are talking about the television version—Carol would have solved everyone’s problems in an hour. She saved the entire team in one episode and went back to her business. Why isn’t Carol in charge, again? Michonne doesn’t like humanity enough, plus, Kirkman’s construction of her was screwed at her character’s inception. I wrote a whole article about her problematic construction in a scholarly article titled “The Importance of Neglected Intersections: Race and Gender in Contemporary Zombie Texts and Theories.” It’s also discussed in Searching for Sycorax.

Oh, and on the behalf of black women, f*ck Robert Kirkman for what he did to Michonne. Forever and always.

KINITRA: I would say the matriarchs of my family have changed my life. I get all of my book ideas from them. Those who have transitioned to ancestor often visit me in dreams and tell me what my next book is going to be about. My mother, Wanda, is the current reigning matriarch of the family; and my sister, Cincia, is the next in line. These women keep me going, keep me sane, and keep me from going full Dark Willow—I would not be in front of you if they hadn’t been there and didn’t continue to be there for me. My family is my rock.