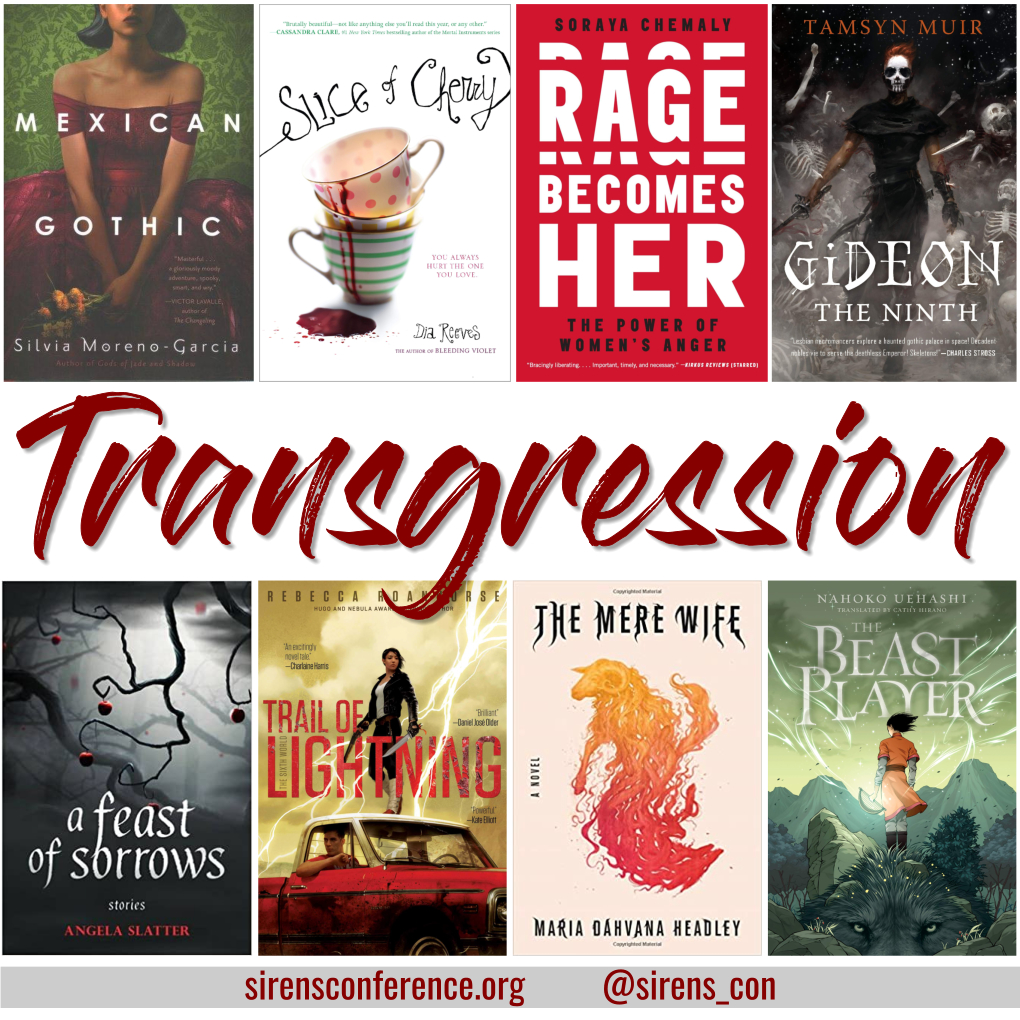 Not being able to gather in person with the Sirens community in 2020 was heartrending. But it also gave us the gift of time: a chance, after more than a decade of work, to take a breath and consider what Sirens is today—and what we want it to be tomorrow.

Sirens is a conference that actively seeks to amplify voices that are pushing boundaries in speculative spaces—and specifically, are pushing those boundaries in the direction of a more inclusive, more empathetic, more just world. Since we featured works on this year’s villainous theme last year, this year’s Sirens Reading Challenge instead showcases 50 works by female, nonbinary, and trans authors that envision that better world—and we’re exploring what that means to us in a series of six posts, using those works as reference points.

Our first post discussed reclamation, finding and sharing those stories that reclaim what it means for us to be from somewhere. Those stories that speak to where we are from, and in doing so, offer a wholly new path for our future. Today, we discuss transgression, in our stories and ourselves.

We are who we are.

Some days, we’re indomitable: blazingly brilliant and incandescently angry and relentlessly defiant. Other days, we are quieter, shyer, more introverted, in need of a cozy chair, a cup of tea, and a cuddle. Yet other days, we are impossibly busy, challenging the world, perhaps, or so often just getting through the endless list of things to do so we can go to bed and try it all again the next day.

But through it all, no matter who we are on any given day, we refuse to be less: less opinionated, less brilliant, less bold, less independent, less ambitious. We refuse to dream less or want less or hope less. We steadfastly remain a library of cleverness, a fistful of fury, and a whole universe worth of hope.

But to be who we are, we must transgress.

We must, often forcefully and relentlessly, reject the roles prescribed for us, the careers allotted us, the aspirations given us. We must reject the impossible beauty standards, the bias and bigotry, the tokenism, all tools of the white heteropatriarchy, all designed to undermine our transgression. We must claim our looks and our bodies and our pleasure. We must identify as we choose and love as we choose. We must be the full breadth of who we might be, or could be, or should be: big, bold, bright, brilliant. Radically kind. Full of hope. Always dreaming.

And we must do it each day. And the next. And the next. Each of those days a persistent transgression, an insistent march toward honesty and justice and humanity.

And so, in the speculative space that is Sirens, our second mission statement is transgression: to find and share those stories, our stories, that transgress boundaries, expectations, and limitations for all people of marginalized genders. That tell stories of kind witches and ambitious princesses and adventurous shepherds, because those are our stories, stories of our kindnesses and our ambitions and our adventures. Those stories that reveal the full humanity of people of marginalized genders—our messy, fragile, relentless, transgressive humanity, full of love and rage and grief and hope. Those stories that show us the world as it could be—and should be—free of the white heteropatriarchal societal demands that expect so much and offer so little. Stories that are, themselves, transgressions and, in turn, inspire or validate or reward ours.

At this time, in this place, it is, for all people of marginalized genders, a radical act to be who we are. But nevertheless, no matter who society thinks we are supposed to be, we are—persistently, insistently, defiantly—who we are.

In Dia Reeves’ Slice of Cherry, Kit and Fancy Cordelle, daughters of the infamous Bonesaw Killer, are broken: by their father’s crimes, their mother’s absence, their town’s ostracization, and seemingly everyone’s assumptions—but they boldly transgress, not by becoming good girls, but by becoming increasingly violent vigilantes. The beauty of Reeves’ spectacular work, however, is that the girls’ brokenness and vigilantism create neither victims, nor, despite the carnage, villains. Kit and Fancy take their power, claim their power, every time they cut an attempted rapist, every time they stab an intruder, every time they war against what people assume they must be.

In Mexican Gothic, Silvia Moreno-Garcia crafts the precise, beating heart of modern women’s horror. Socialite Noemí plays at transgression, pleading with her father for permission to continue her education between rounds of parties and cocktails and boys—until she travels to remote High Point on a family errand. There she unearths a house of horrors: a relentless, increasingly flagrant march of sexual assault, eugenics, and presumed ownership, muddied by an eddying fog of not-quite-realness that causes Noemí to doubt her perceptions—and in order to save herself and others, she must learn to forcefully transgress. Moreno-Garcia’s masterwork lays terrifyingly bare the quotidian horrors of women of color, forced to endure a lifetime of male intrusions, violence, and colonization.

Maggie Hoskie, the Dinétah monster-hunting protagonist of Rebecca Roanhorse’s post-apocalyptic Trail of Lightning, is certain that she is, herself, a monster. After witnessing her grandmother’s brutal murder, Maggie’s clan powers awaken, and she’s mentored by divine monster-slayer Naayéé’ Neizghání—at least until she becomes too violent. Then she’s on her own, living bounty-to-bounty, until the world needs saving. Maggie’s transgression, ultimately and gloriously, is her heroism: She gazed long into the abyss and learned that, because of her monstrousness, she could save the world.

Maria Dahvana Headley deconstructs monstrousness as well, in The Mere Wife, her transformation of Beowulf. At Herot Hall, everything is a Stepford-pretty utopia, and Willa, married to Herot heir Roger, is no different—until her son, Dylan, meets Gren, who belongs to Dana, a soldier of war living in a cave outside the suburban perimeter. In this contemporary exploration of monstrousness and society, Dylan and Gren are the catalysts, but not the monsters. As Willa’s and Dana’s equally carefully constructed worlds collapse, their fears lead them to make sometimes desperate, sometimes illogical, always transgressive decisions—leading us in turn to ask what it means to be monstrous in the first place.

Rage Becomes Her, Soraya Chemaly’s explosively smart work of nonfiction, delves deep on anger, perhaps the most transgressive of women’s emotions, the one that is impossible to reconcile with white heteropatriarchal demands for silence, politeness, and passivity. Through science and anecdotes, Chemaly paints our unexpressed, unvalidated rage as self-destructive, both mentally and physically. But she also finds that women’s rage is a necessary and significant source of power, one that acts as a critical catalyst for women seeking personal, professional, and societal changes.

In The Beast Player by Nahoko Uehashi (translated by Cathy Hirano), a fantastic world of mythical beasts teeters on the brink of war—and whoever can harness those beasts into weapons of destruction will surely prevail. Elin, a caretaker of water serpents, is caught in the middle, pressed to stand aside as her serpents are taken for battle, while knowing that there must be a way to both avert a war and save the extraordinary beasts in her care. Themes of duty, honor, kindness, and grace thread through Uehashi’s foundationally transgressive work that firmly rejects war and destruction as inexorable.

Gideon the Ninth, Tamsyn Muir’s gothic puzzle-box of a book, is transgression incarnate. In some future year, somewhere in space, the First House, with opaque promises of power, invites the eight other beholden houses to each send a necromancer and a cavalier primary to an abandoned building full of deadly riddles. But Gideon, tricked into serving as the cavalier primary for Harrowhark, the Ninth House’s necromancer, would rather stab Harrow with her teensy-weensy cavalier sword than solve mysteries. While Shades of The Hunger Games abound, Gideon is a book born not of almost-accidental revolution, but of Muir’s utter determination to put rude, defiant, ambitious, queer women on a page—and her unrelenting authorial transgression is magnificent.

While calling Angela Slatter the heir apparent to Angela Carter and Emma Donoghue may seem a bold assertion, it’s appropriately so—but Slatter takes Carter’s and Donoghue’s reclamation of fairy tales even further by entirely eschewing any conversation with the heteropatriarchal foundations of fairy tales. She—like her heroines—is too busy to discuss, criticize, or even chastise those who would impose conformance. Too busy being, if you will: being frightened and fearless, being brave and bold, being frail and fantastical. And A Feast of Sorrows, one of her collections of short fiction, features twelve of her finest, darkest, most transgressive fairy tales.

This post is the second of a six-part series on Sirens’s mission. You can find the first post, on reclamation, here. We will update this post with links when all posts are published.