We’re pleased to bring you the next in a series of candid, in-depth interviews with this year’s Sirens Guests of Honor. We’ll cover a variety of topics relevant to Sirens with each author, from their inspirations, influences, and craft, to the role of women in fantasy literature, and discuss our 2017 theme of women who work magic—particularly women who have power and wield it. We hope these conversations will be a prelude to the ones our attendees will be having in Vail this October! Today, Amy Tenbrink interviews Victoria Schwab.

AMY: You’ve said many times that you have an adversarial relationship with fear—and that, therefore, once you knew that you were afraid to write a book, you knew you had to. You’ve now written 12 published books, with more on the way. What still scares you about being a writer? How do you manage that fear? 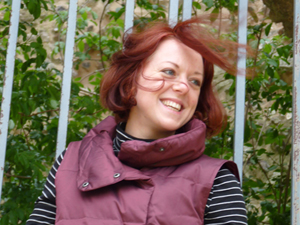 VICTORIA: Honestly, one of the most important things to realize is that fear doesn’t go away. Fear is something I experience every time I sit down to write—fear that it won’t be good enough. Fear that I won’t nail the style, the flow. Fear that the idea in my head won’t translate to the page. Fear that even if I succeed in finishing the book, it won’t be successful or well-received. Fear is a creator’s constant companion, so the challenge becomes learning to embrace (or at least acknowledge) it and then continue to create in spite of it. Sometimes that means tricking your brain into turning off your self-editing mechanisms for a short period of time, giving yourself permission to suck, or simply acknowledging that the only way out is through. I often switch to pen and paper, because for some reason it’s easier for me to ignore all those external voices when it’s just ink and page. I can cross things out, make mistakes, and keep going. AMY: You have a master’s degree in, more or less, monsters – though, as you’ve noted, in studying monsters, you’re truly examining what humans and society find monstrous. (In 2011, Sirens, too, examined monsters, and we delved deeply into the concept of the monstrous feminine (or the idea that women’s femininity, or sexuality, or unconventionality is viewed by society as monstrous). We hear you!) From your Monsters of Verity duology (featuring literal monsters) to Vicious (with its monster-slash-antihero protagonist), monstrousness, and perhaps relatedly, society’s othering of certain people are consistent themes in your work. Why do these themes speak to you? Who is your favorite monster, monstrous human, or antihero that you’ve created? Why are they your favorite?

VICTORIA: I’m so glad you phrased it that way, because the concept of “othering” is exactly what I love exploring, specifically the concept and creation of outsiders—both those born outside a society, and those born within a society but made to feel excluded. I’m fascinated by the multiplicity of forms, and the societal commentary, how outsiders are judged compared to insiders, how you can be from a place but not of it, and how outsiders can become insiders and insiders can be relegated to outsiders. Asking me to choose a favorite is a rather monstrous thing to do…I love them all for different reasons, but Victor Vale, from Vicious, is the closest thing to an autobiographical character I’ve ever written, so he occupies a special place in my heart.

AMY: In an interview with the Washington Post last year, you said, “I really just have no interest in weak females and dominating men.” Many Sirens would applaud this statement. But how difficult is it for you to subvert societal stereotypes and perceived norms in your writing? Do you find yourself accidentally writing weak women or domineering men?

VICTORIA: Not as difficult as you’d imagine. I simply write the kind of people I want to read, to be friends with, and/or to be.

AMY: You write about ambition in a way that few writers do: unabashedly, unashamedly, not only for your white, cishet male characters, and not only when ambition leads to reward. As a woman, I found Lila Bard’s unrelenting ambition to be a safe haven in a storm of literature where women are judged for seeking leadership or power. As a reader, I was fascinated that Vicious turned on its characters’ ambitions, which brought them first very close together and then drove them very far apart. How ambitious are you? And are you proud of that ambition?

VICTORIA: I am extremely ambitious, some would say to a fault. I am distrustful of ambivalence, have an aversion to mere contentment, and have a fear of stasis that leads me to be constantly striving for more. When I sit down to construct my characters, I first ask myself what they fear, what they want, and what they’re willing to do to get it. Thus, their ambition is one of the pillars of their design. And one of my own pillars, too. AMY: My last question referenced power, and I find power a particularly interesting fantasy literature construct, especially in your work—whether it’s the contrast of politics of the four Londons in your Shades of Magic series or the leadership styles in This Savage Song, or the characters’ pursuit of literal power as seen in Vicious. You’ve also stated that you took great care in your Shades of Magic trilogy to ensure that non-white and non-heterosexual people were given immense power. Can you share some insight into your process for crafting power structures, be that social class, political theories, magical ability, or societal stereotypes? How do you ensure that your fictional power structures don’t suffer the same failures as our real-world power structures—and if they do, that you’re crafting those failures with intention and transparency?

VICTORIA: I’m certainly fascinated by power dynamics, both in relation to relationships (hence why my love of siblings, familial, and adversarial relationships outweighs straightforward romance) and in relation to the larger world. In the Shades of Magic series, the power structures of the world are molded to the individual Londons. The power dynamics within that world are driven not by gender or race but by magical prowess. In Vicious, the literal powers are determined by the psychology of those at the time of death. In the Monsters of Verity duology, the power structures are molded by morality and the absence of it.

As to your second point. I think a key element of power structures ARE the flaws, the cracks in the system. The world—along with its powers and paradigms—is the first thing I design when starting a series. The people who populate the world come next, because I want them to be a product of their environment, its strengths and its weaknesses. AMY: Lastly, tell us about a remarkable woman of fantasy literature—an author, reader, agent, editor, scholar, or someone else—who has changed your life.

VICTORIA: I’m going to say J. K. Rowling. The most obvious reason is that before Harry Potter, I was not a reader. That is to say, I was competent, even proficient, but I had little enjoyment. I’d never been so consumed with a story that I forgot the act of reading. She opened a door in me that has never closed. Then, long after I’d experienced Harry Potter, the longing for that kind of world, for magic and whimsy and darkness and a place you wanted to stay beyond the pages—those things led me to write A Darker Shade of Magic, which took my career—and my craft—to an entirely new place.

Victoria Schwab (also known as V. E. Schwab) is the product of a British mother, a Beverly Hills father, and a southern upbringing. Her first young adult novel, The Near Witch, was a dark original fairy tale and her next one, The Archived, is about a world where the dead are shelved like books (and has a sequel, The Unbound). Victoria’s first adult novel, Vicious, is about two brilliant and highly disturbed pre-med students who set out to generate their own superpowers and end up as mortal enemies; the series will continue with Vengeful, expected to be published in 2018. Vicious received a starred review from Publishers Weekly, which named the novel one of its best books of 2013 for SF/Fantasy/Horror; the American Library Association’s Reference and User Services Association awarded it the top fantasy book in their 2014 Reading List. The first book in her adult series, A Darker Shade of Magic, is about Kell, a magician who can move through multiple versions of London, and Lila, the pickpocket who steals a talisman that could end them all (its sequels are A Gathering of Shadows, which is already out, and A Conjuring of Light, expected to be published in 2017). Most recently, Victoria published the first book in the Monsters of Verity Duology, This Savage Song, in 2016; the sequel, Our Dark Duet, is expected in 2017. When she’s not haunting Paris streets or trudging up English hillsides, Victoria’s usually tucked in the corner of a coffee shop, dreaming up monsters. She loves fairy tales, folklore, and stories that make her wonder if the world is really as it seems.