Read Along with Faye: Poisoned Apples: Poems for You, My Pretty by Christine Heppermann

Posted on April 27, 2018 at 9:00 am | Comments Off on Read Along with Faye: Poisoned Apples: Poems for You, My Pretty by Christine Heppermann 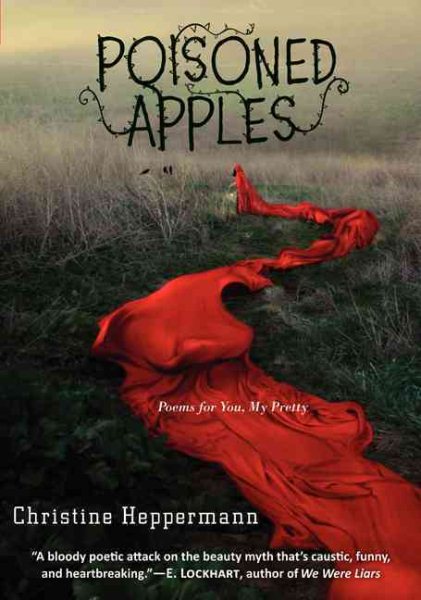 Have you ever fallen into a reading slump? Sometimes, all I want to do is inhale romance novels or immigrant middle grade stories, and I’ll read a dozen one after the other before needing to catch a breath. Other times, the sight of yet another book feels daunting. Or the next read is bound to fall short of expectations. In the case of YA fiction, I’m afraid I find myself in the valley of the slump.

I first came back to YA as an adult in 2010. Since the start of high school, I’d mainly read books for coursework, and I was blown away by nearly every YA novel I read; I was reading the best of YA fiction from the ten years prior. And while I don’t admit to being magnificently well-read in a number of genres, in YA, and in fantasy, thanks to this conference—I am in this instance. And that’s when Christine Heppermann’s slim collection of poems, Poisoned Apples: Poems for You, My Pretty just didn’t make it up the hill.

In today’s realm of Instagram poetry, Poisoned Apples is an antecedent—accompanied by high-contrast, black and white photographs—and could be a companion of a sorts to Rupi Kaur’s Milk and Honey. Originally published in 2014 and using the familiar framework of western fairytales, Heppermann’s poems address body image, toxic female friendships, eating disorders, beauty standards, sexual agency, and other topics that would typically concern a (probably) white, (probably) cis-gendered “modern” teenage girl in a (probably suburban American) high school. (I can’t confirm these details for sure, but with so much focus on self-image, the reader has to picture what kinds of girls are the subjects of these poems. And given a careless Romani slur in the collection’s sole villanelle, one has to assume…)

Which isn’t to say those are necessarily shortcomings. The book is a handsome tome, pocket-sized with art and text laid out just-so, and Heppermann is clearly talented, even if her poems don’t speak to my experience as a former teenage girl. “Red Handed,” a sexy retelling of Red Riding Hood and the Wolf, is a highlight, but I find Hepperman’s non-fairytale poems the strongest, which are interspersed between poems with fairytale inspirations. “If Tampons Were for Guys” is a sardonic, witty musing: “For pads with Wings, Kotex shows jet fighters. / For Heavy Flow, ninjas surf a tsunami.” “Nature Lesson” challenges readers to rethink school dress code policies for girls in order to not distract their male classmates: “We say / that if a hiker strays / off the path, trips, and / winds up crippled, / is it really / the canyon’s fault?” Best of all is “Photoshopped Poem,” which is clever as it is hilarious: “I took out most of the lines. / I left in a few / so it wouldn’t look unnatural.”

For the right readers, Poisoned Apples is a winner. I can picture (some) teenage girls quoting lines to themselves, excitedly sharing it with their trusted friends, and keeping it near to them in their backpacks. Though slim, I wonder if it isn’t meant to be read in one sitting, for the themes of body image and eating disorders came up quite often—more than the others—and felt over-emphasized.

For my personal fairytale itch, I would rather turn to Emma Donaghue’s Kissing the Witch or Francesca Lia Block’s Roses and Bones. For YA books with main characters facing eating disorders, I recall Laurie Halse Anderson’s Wintergirls or Sarah Dessen’s Just Listen. Poisoned Apples felt too much like trod ground, and my reading material these days is far more diverse and intersectional. I think, ultimately, I was looking for a very different type of book than what I read.

Next month’s book: Food of the Gods by Cassandra Khaw