Book Club: The Prey of Gods by Nicky Drayden 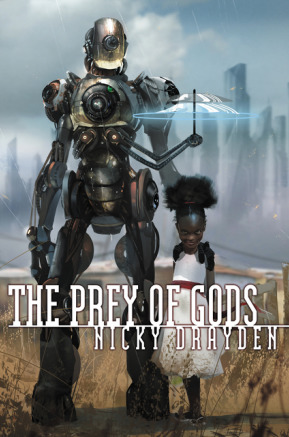 And what The Prey of Gods is, more than anything, is ambitious.

Nicky Drayden’s first novel is a science-fiction/fantasy mash-up, a living mythology, an AI fever dream, a breakneck romp to the brink of apocalypse that is also—improbably, shockingly—funny. Nicky Drayden dreamed big and bold and bright, y’all.

We’re in a near-future South Africa: Personal robots abound, the government has scaled renewable energy, genetic engineering is a coveted industry. Yet, vast class and identity striations still exist: Rural villages struggle with basic needs, those personal robots certainly aren’t a societal entitlement, and several of the characters struggle with acceptance of their sexuality or gender presentation. And beneath the surface roil surprising challenges: a new hallucinogen, a sentient AI uprising, and a living goddess who wants (what else?) to take over the world.

In many ways, The Prey of Gods is a smart, cleverly structured Scooby Gang book: a group of seemingly random people, meeting purportedly by happenstance, saves the world. The cleverness here is taking those seemingly random people, most of whom don’t know each other at the beginning of the book—and one, for heaven’s sake, that speaks only binary at the beginning of the book—and constructing a plot that brings these people, with their unique talents, together at the right time to save the world. Drayden will see your Buffy-style these-are-my-friends Scooby Gang and raise you a cast-of-strangers Scooby Gang.

Hang on, I’ll do the math for you: That averages out to 6.39 pages per chapter, and 62.83 pages per point-of-view character. And I’m deeply conflicted about those numbers.

On one hand, The Prey of Gods reads like an accelerant. Those short chapters, their cliffhanger endings, and the constantly shifting points of view combine to make this read very much like the world is on fire. The pacing lends a highly skilled immediacy to the book, especially as you see the pieces start to come together.

On the other hand, I usually struggle with multiple points-of-view books, and I found the sheer number of point-of-view characters in The Prey of Gods and the constantly shifting viewpoints to be a huge challenge as a reader. In the end, I didn’t end up identifying with or liking or wanting to know more about most of the point-of-view characters. (Though I liked the robot a lot. Like, a lot a lot.) And I’m trying to reconcile that with the fact that there are characters with whom I’ve spent fewer pages (say, in short stories) that I love and why, in a larger work, 62.83 pages was so wholly insufficient. (I also really liked the drug dealer and he’s hardly on the page!)

So where I come out is this: I greatly, deeply admire Drayden’s ambition. To envision a realistic world, set in the near future, that includes both sentient AI and a living mythology, and then to envision that world saved by an almost random group of often-marginalized people is an act born of tremendous ambition. The Prey of Gods is smart and funny and inclusive—and if you’re looking for someone doing something different and aspirational and clever in the speculative space, this is it. But I also found that the execution kept me, as a reader, too far removed from the characters themselves. In a world of sentient AI, the fact that I liked the robot far and away the most of anyone perhaps means that Drayden’s characters were not, in the end, quite human enough.