The Sirens Review Squad is made up of Sirens volunteers, who submit short reviews of books (often fantasy literature by women authors) they’ve read and enjoyed. If you’re interested in sending us a review to run on the blog, please email us! Today, we welcome a review from Manda Lewis on Cass Morris’s From Unseen Fire. 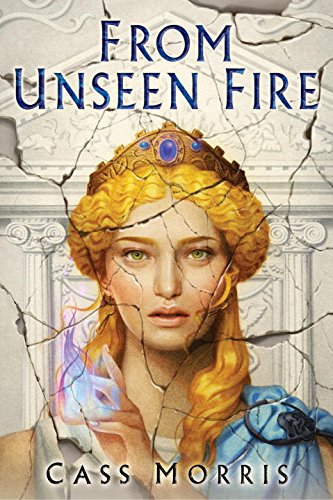 I’m not saying that while finishing Cass Morris’s From Unseen Fire that I donned a toga and took my meals lounging on a couch (chairs are so old-fashioned!), but I’m not saying that I didn’t either. I think those who know me know which is most likely.

At its heart, From Unseen Fire is a story about a woman discovering the depths of her own power, while overcoming abuse and repression to forge a new path instead filled with purpose and love. This is the story of Latona of the Vitelliae. Latona, a mage in the city of Aven who has spent years in the court of a vicious dictator, has traded her body for the protection of her family. When that dictator dies, she is free of his maltreatment and manipulation. Can she settle back into a loveless marriage of convenience and into the life of a noblewoman, supporting the political aspirations of her father, brother, and husband? It seems that the Goddesses who have blessed her with Spirit and Fire magic have other plans for her. Latona’s long repressed magic starts to manifest more powerfully, and with it, the drive to help her city and its citizens.

There were many things I enjoyed about Morris’s debut novel, which is part historical fiction and part fantastic re-imagining of a Romanesque republic. Aven is in a state of flux, as exiled leaders race back to the city in the wake of the dictator’s death. The Aventan society will have to weather rebellion, the threat of war, and political power struggles between several factions as it recovers from the terror under which it was living. I was easily pulled into the world with her rich descriptions of the city, its people, the architecture, the food, and even the fabric! Morris’s historical research shines through when showing us Latona’s day-to-day life, along with her family and several other power players in the republic.

Mostly, I was taken with the relationships between these players and how they affected the city. I enjoyed seeing Latona’s devotion to her two sisters and the interplay between them, as well as her new friendship with Sempronius Tarren, a recently returned senator who has his sights set on a praetorship and military power. In regards to Latona’s newfound power, Morris does a great job contrasting the support from Sempronius, her sisters, and the high priestess at the temple of Venus against the objections of her father, her husband, and the restraints of their society. I found myself asking: to whom will Latona acquiesce, and more importantly, will she follow her own heart?

I must admit, I did stumble a bit over the names of the many characters while reading, which sometimes meant I had to go backwards to remind myself who was whom. This made the early part of the book a little slow-going. Midway, I switched to the audiobook version, which helped me a lot with the pronunciations and keeping the characters straight. That said, their complexity lent to the historic authenticity and the Romanesque feel of the entire culture.

From Unseen Fire gives us an intriguing beginning to Aven Cycle, and Morris has much more to tell us in future novels. I look forward to seeing how Latona evolves and grows, both in her strength of magic and strength of character. I hope that we will see more of her working with the Aven people of different classes as she carves her place in the world; I also hope to see more of Sempronius, and how war and his growing relationship with Latona changes him. Then, the biggest question: will they do what they must to secure a prosperous future for Aven, or will it fall to ruin?

Manda Lewis holds a BS degree in aerospace engineering and a Masters of Tourism Administration, and served in the Air Force for seven years. She currently works for a children’s museum in Raleigh, North Carolina, hosting after-hours special events. She is also the caretaker of two small humans who look like her and often have dragon tea parties. Manda has always made it a habit to draw, color, and doodle on just about everything within reach and loves themes far more than anyone really should. Manda has been a volunteer for Phoenix Rising, Terminus, and Sirens for the last ten years.