Read Along with Faye: The Case of the Missing Moonstone by Jordan Stratford

Posted on July 27, 2018 at 9:00 am | Comments Off on Read Along with Faye: The Case of the Missing Moonstone by Jordan Stratford 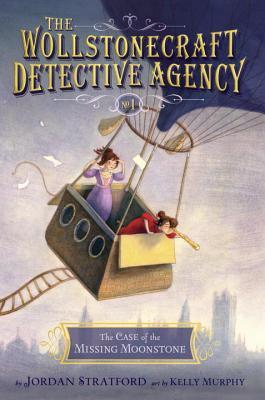 One word jumps to mind when describing Jordan Stratford’s Wollstonecraft Detective Agency novels, which is: delightful.

But here are some others: freaking adorable. Positively charming. If these books were animals, they’d be big-eyed puppies, ones that I would want to snuggle forever. The first book, The Case of the Missing Moonstone, introduces our two heroines: precocious, socially awkward, and brilliant eleven-year-old Ada Byron, and adventurous, emotionally intelligent, story-loving fourteen-year-old Mary Godwin. Stratford has reimagined the world’s first computer programmer Ada Lovelace and the world’s first science fiction novelist Mary Shelley as young girls who form a secret constabulary apprehending clever criminals in 1826 London—and, more importantly, as best friends.

While an author’s note at the end of each book explains the liberties Stratford has taken with the timeline—real-life Mary was eighteen years older than Ada—as well as the numerous homages to the time period, historical figures and various Easter eggs, young readers will be won over by Ada and Mary themselves. Both tutored by Peebs, an in-disguise Percy Shelley who remains a friend of Lord Byron but with no funny business with Mary, the two decide to form a detective agency, named after Mary’s deceased mother (of course the famed Mary Wollstonecraft). When Ada discovers a thing called the newspaper and that only unclever criminals get written up as they’ve gotten caught, she locks poor Peebs in the distillery closet while she and Mary take on their first case—clandestinely, of course! Book nerds will delight in the fact that their case is based on the very first detective novel published in English in 1868, The Moonstone.

Stratford has rendered Ada and Mary wonderfully. He’s captured Ada’s mathematical genius and isolation, with references to her BLE (Byron Lignotractatic Engine), her friend Charles Babbage, her hot air balloon, her illness (in later books), and her evident difficulty with names, people, and social situations. Mary then, is her foil: not just older, but empathetic, keenly aware of social interaction, and with a drive for drama and Romanticism. The Watson to Ada’s Sherlock, except better because these are tweenage girls who are very, very choosy about their cases! They must be interesting enough to keep Ada’s attention, and—as she is brilliant and easily bored—run-of-the-mill cases just will not do.

I must say, I barely got to enjoy Kelly Murphy’s illustrations, as I listened to all the Wollstonecraft Detective Agency novels on audio with voice actress Nicola Barber’s expert narration. (A glimpse of the illustrations in a library copy confirmed they were super cute!) Barber captures Ada’s willfulness and Mary’s reason, Peebs’s lilting confusion and Charles’s (yes, that Charles Dickens, I didn’t realize until the end!) wry humor with variety and skill, with different regional accents for the servants (northern, of course). Listening to the first book was such a pleasant way to pass the time, I immediately downloaded the next two books.

If I had any complaint, it would be that—except for the references to the Georgian period and technologies of the time—there is no reason that Ada and Mary need to be based on real-life Ada and Mary, given the liberties taken with the timeline and characterization. Ada doesn’t really use her mathematical prowess to solve any cases, but rather her logic and reasoning skills. The references, though, are a huge part of the series’ charm, and their lives are so reimagined it certainly feels more like fiction than real-person fanfiction. Even more so when the cast enlarges with book two, The Case of the Girl in Grey, bringing on Ada’s sister Allegra and Mary’s sister Jane—real-life Jane was actually real-life Allegra’s mother.

The publisher has compared the Wollstonecraft Detective Agency books to the Mysterious Benedict Society and Lemony Snicket, which, I guess, if you’re going to go down the puzzle-solving mystery novels for middle graders lane, makes sense. I found it better than both of those series, and the voice spiritually similar to Patricia Wrede and Caroline Stevermer’s Sorcery and Cecelia, but for a slightly younger age group. Similarly charming. Similarly delightful.

Next month’s book: The Memory Garden by Mary Rickert