Posted on March 7, 2019 at 9:00 am | Comments Off on Mishell Baker’s Borderline is like Real World: Fey Los Angeles

The Sirens Review Squad is made up of Sirens volunteers, who submit short reviews of books (often fantasy literature by women authors) they’ve read and enjoyed. If you’re interested in sending us a review to run on the blog, please email us! Today, in honor of Mishell Baker’s Guest of Honor week here at Sirens, we welcome a review from Nivair H. Gabriel on Mishell Baker’s Borderline. 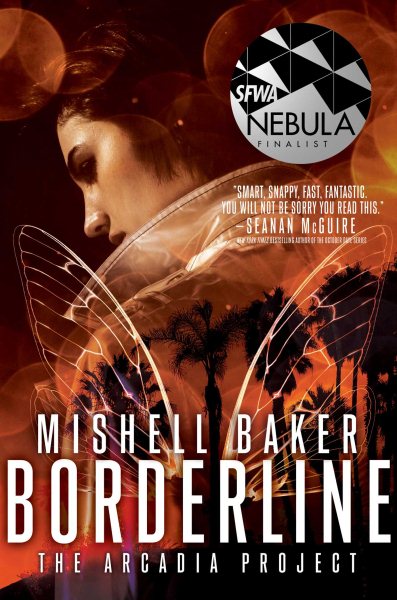 There aren’t nearly enough grumpy, disabled heroines in fantasy literature. As a woman who’s lived with mental illness for the better part of thirty-one years, I’ve frequently felt bereft when roleplaying my favorite protagonists in my head. They don’t need to pack their daily medication when they go on quests. In their critical face-offs with villains, anxiety never triggers their most unhelpful stress response. Their bum knees (I have those too) never collapse in the heat of battle. I can follow their adventures from a distance, but implicit in the trends of these stories is the assumption that I could not have adventures of my own.

Not so with this book. Reading Borderline, for me, was relatable escapism at its finest from moment one. Protagonist Millicent Roper begins the story in a psychiatric center, where she’s sequestered herself after a suicide attempt that left her with two prosthetic legs and scars both literal and figurative. (It did no good for her pre-existing Borderline Personality Disorder, either.) An enigmatic, unflappable recruiter named Caryl shows up to offer Millie a ticket back into the film industry and a place to stay—and then Caryl disappears, in the blink of an eye. When Millie’s therapist warns her away from Caryl with more urgency than she’s ever shown before, she seals the deal. That’s how Millie finds herself at an eclectic mansion with the Arcadia Project, a ragtag crew of former mental patients that would make an incredible season of Real World: Fey Los Angeles.

Yes, Millie’s Hollywood is full of fey: not just fairies, but vampires, goblins, muses, and even the odd changeling, all surveilled by the Project. Her first assignment with too-gorgeous partner Teo is supposed to be a simple errand, but it turns into a missing persons case that soon points to a massive fey conspiracy. It turns out fairies and celebrities are mostly one and the same, and Millie’s the perfect person to deal with them; after her promising early career and sudden estrangement, she’s equal parts savvy about and enthralled with the fey and famous.

Mental illness is also an ideal qualification for a human working in the world of magic. Having lived through the particular hells of a chronic mood disorder, traumatic brain damage, and psychiatry, Millie has more than enough honed survival skills to handle supernatural danger. She’s always keeping track of her “Reason Mind” and “Emotion Mind” and practicing “distress tolerance”—familiar concepts to anyone else who’s been in dialectical behavior therapy. The constant thought-churning of a person who has to fight their own brain to survive is not unlike the hypervigilance required of a magical private detective.

Millie’s disabilities, though, don’t give her superpowers; she’s not a shallow trope. The iron in her prosthetics does neutralize fey magic, but that’s inconvenient or irrelevant as often as it’s convenient. Her journey is not about soothing an ableist world. In fact, she frequently points out its flaws: “As wrong as it is, people in wheelchairs don’t get treated normally by strangers. People see the chair first and wrestle with their discomfort, then their guilt over their discomfort.” She’s also careful to note that she’s not immune to socially instituted prejudice herself when she meets a new roommate who is a little person, and then when she meets that roommate’s boyfriend, who is Black: “I felt intimidated, then guilty about being intimidated, torn between the white liberal fantasy of color-blindness and the stereotypes I’d been fed my whole sheltered life.” Baker’s clear commitment to nuanced, three-dimensional characters and careful evasion of harmful tropes show that she’s not just trying to write inclusive literature—she’s trying and doing a damn decent job.

More than anything else, what I yearn for in writing is voice, and Borderline has that in spades. Baker has not only crafted a protagonist with the richly developed, complex layers of an award-winning tiramisu; she’s also woven Millie’s singular personality into every line of her narration. At one point, Millie notes, “It had been a long time since I had been awakened by a sunrise, and I’m one of those rare people who adores it. I love a day I haven’t screwed up yet.” Her cynical rejoinders make me snicker, but her sarcasm carries a self-aware vulnerability that both surprises me and secures my loyalty.

Somehow I haven’t yet mentioned the nimble pace of this novel. It’s the kind of swift delicious that’s my reader brain’s favorite and my writer brain’s worst nightmare—it takes who-knows-how long to create, but you could devour it in an afternoon. Or in an evening, say, when you suddenly realize you have twenty-four hours left to write a review of a book you read a very full two years ago. If you’re anything like me you’ll tell yourself to skim, but end up just plain reading . . . and being so very glad that this time, you’ve got a copy of the sequel on the shelf right next to you.

Nivair H. Gabriel has written all her life, and feminist fantasy is her heart-home. At sixteen, she thought it would be fun to go to MIT and get a BS in aerospace engineering, so she did. She has also contributed writing to Marvels & Tales, io9.com, Fantasy Magazine, Weird Tales, Pittsburgh Magazine, and the Sirens benefit anthologies Queens & Courtesans and Witches & Warriors. She holds a dual-degree MA/MFA in Children’s Literature and Writing for Children from Simmons College, and works as an Assistant Editor at Barefoot Books.