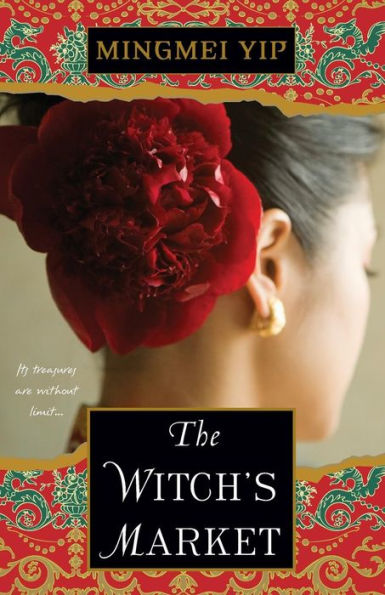 We all have those tropes, you know? Those tropes that, for whatever reason, we adore, we seek, we…yes, we excoriate.

One of those tropes, for me, is witches. I have sky-high expectations for books written by women about witches.

Likely been disappointed by it.

In my dreadfully thin defense, I have bees in my proverbial bonnet. I expect my fantasy revolutions to address economic instability and I want my monster girls to be largely unrepentant and I need my witch books to come with a decidedly feminist bent. The word “witch” has been weaponized against women for a thousand years; I want that ostracization and persecution to be handled—and handled well, feminist-ly well. I want questions of power and answers of power and epiphanies of power. I probably want revenge, but that one might be just me.

For all the imaginable reasons, I have a hard time with a fantasy world with “witches” where this thousand years of shitty history isn’t addressed. And if that world isn’t so much a fantasy world, but our world, our contemporary world with its history of witch hunts and drownings and burnings and so on, but with real witches, well.

The Witch’s Market gets the broad strokes right. Eileen Chen, Chinese-American professor of folk religion, is chasing tenure. To date, her scholarship has focused on Asian traditions, primarily the Chinese incantations practiced by Eileen’s matriarchal line. Eileen isn’t sure that her grandmother really was a witch—but she isn’t sure that she wasn’t, either. And among her university crowd, Eileen deliberately cultivates the idea that maybe she is a witch, too.

Somewhat inexplicably, Eileen’s male department chair and mentor suggests that she needs to round out her scholarship with some white-people witchery in order to complete her research and achieve tenure. Why? No idea. But he offers her time off to do it, which conveniently coincides with a dream Eileen has indicating that she should go to the Canary Islands to seek some witches. Why the Canary Islands? I guess they’re full of witches? So Eileen leaves her pragmatic lawyer sister and her on-again, off-again, rich, that-guy boyfriend, and heads to the Canary Islands.

Within days of arriving on the islands, Eileen has seen a ghost, heard a disturbing rumor about the earth swallowing a man and a dog, danced naked in the moonlight with some witches, agreed to stay with a rich guy and his housekeeper in his castle, and met a seriously extroverted former cabaret singer. If that sounds like a lot, well, I haven’t even gotten to the dead daughter, the missing son, the seemingly endless list of men who fall for Eileen, or the rich guy’s jealous dead wife. It’s a lot. A lot.

Which could have all been fine! In terms of plot and scope, this book reminds me a lot of Dreaming in Cuban or The Island of Eternal Love. Grand, sweeping family mysteries, rife with ghosts and coincidences and mistaken assumptions, spanning decades or generations. Assuredly, the great lot of plot is not where The Witch’s Market lost me.

Where it lost me was its internalized misogyny, its relentless tokenism, its aggressive heteronormativism. While men fall all over themselves to chase Eileen—she receives not one, but three marriage proposals in the last third of this book—Eileen herself finds every other woman in this book lacking. And Eileen’s judgmentalness isn’t merely unnecessary, but hypocritical. She judges other witches for using their power, even as she hones her own. She judges an aging woman for sleeping with a young man, even as she sleeps with a man more than a decade her junior. She judges a housekeeper for drinking several glasses of wine and then sits down to pour herself some sherry. Unsurprisingly, the woman who got Eileen drunk and danced naked with her in the moonlight turns out to be evil. The frustrating list of this one woman denigrating all other women goes on and on. And on.

In a similar vein, The Witch’s Market is unyielding in its presentation of traditional heteronormative stereotypes as valid. Eileen turns down all three marriage proposals, but nonetheless seriously considers each one—despite that all three of these men assuredly suck—because each is considered a catch. Every major player in this book insists that Eileen seriously consider one or more of her suitors: He’s a good man. He’s a nice man. He’s a rich man. He’s a handsome man. He’ll take care of you. You wouldn’t have to work anymore. You would have all the time in the world to write your book. In fact, Eileen’s sister—her lawyer sister—berates her for turning down not one, but two rich men. I checked the copyright date on this book four times, but each time it somehow still said ©2015.

I could continue, but I presume that I lost most of you at “internalized misogyny,” so I don’t have to go into how Eileen others basically everyone (locals, witches, women who have sex, the neuroatypical character), how all the similes are also misogynist tripe (something mundane “fell open easily, like a prostitute’s legs”), how Eileen’s inner monologues are logically inconsistent (she can’t seem to keep track of a conversation), or how every man in this book sucks (I can neither confirm nor deny if all the women suck because Eileen hates them all).

That said, I had very similar issues with a couple other books, so if you liked A Discovery of Witches or The Thinking Woman’s Guide to Real Magic, you might want to ignore me and give this one a shot!