Posted on April 25, 2019 at 9:00 am | Comments Off on Suzanne Scott’s Fake Geek Girls and the binaries of fan culture

The Sirens Review Squad is made up of Sirens volunteers, who submit short reviews of books (often fantasy literature by women authors) they’ve read and enjoyed. If you’re interested in sending us a review to run on the blog, please email us! Today, in honor of Suzanne Scott’s Guest of Honor week here at Sirens, we welcome a review from Hallie Tibbetts on Suzanne Scotts’s Fake Geek Girls. 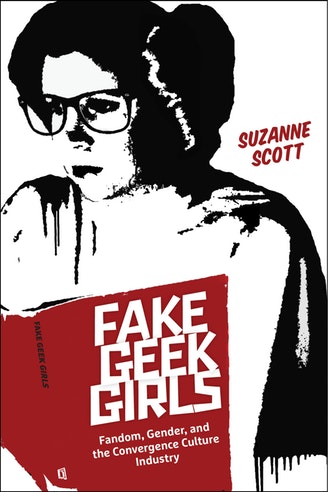 I am of two states of mind about being a fan and about the concept of being “in fandom.”

On the one hand, I have had wonderful experiences engaging with and sharing my love of particular stories—and it’s always love for stories, isn’t it—from acting out scenes from Heidi and Star Wars under the tables in kindergarten to longing for just one more episode of Ranma ½ to planning expansive, immersive Harry Potter conferences with a million moving pieces, among other fan activities. I wouldn’t be where I am today had I not, through writing fanfiction, finally learned not just about punctuation and grammar, but concepts like foreshadowing and symbolism that were opaque to me during my formal education. I wouldn’t have met the majority of my closest compatriots—people I connected with online, while being an unabashed nerd—and I wouldn’t have been so easily able to bypass the early, awkward, and for me, slow and nerve-racking stages of making new friends. If you’ve considered yourself to be “in fandom,” you’re probably nodding along with at least a few of those experiences.

On the other hand: Fandom has given me some awful experiences. It’s a time-sucking distraction from other pursuits—an intense crush with all the attendant (and unrequited!) feeeeeeelings. A fandom is a community of very real personalities, which can produce a great deal of pointless and exhausting drama, as well as shut people out for any number of reasons, not limited to just their favorite tropes or characters, but including the very essence of who they are. And, on a personal note that I rarely share, the end of my tour of fandom duty ended with a heavy dose of toxic (mostly) masculinity, harassment, and threats, and those situations and people haven’t disappeared, even though I have disappeared from them—and my worst experiences were nothing, relatively, given that doxxing and swatting are in play now.

I haven’t considered myself to be “in fandom” for a decade now. My recent media loves no longer prompt me to seek story extensions outside those of my own brain—though maybe I haven’t met my next perfectly fannable thing yet. Sometimes I miss the sense of joy and wonder at knowing I’m not the only one who’s been transported into and by a story; other times, I’m so deeply protective of my own mental journeys I can hardly admit I enjoyed a work. So when it came time for Sirens to review the academic Fake Geek Girls: Fandom, Gender, and the Convergence Culture Industry by guest of honor Suzanne Scott, I was, unsurprisingly, of two minds: I’ll do it, and I don’t want to do it at all. But, like a Lannister, I keep my promises (and yes, pay my debts). And like Angelica Schuyler, I managed this review right on time.

Fake versus real. Geek, opposed to “normal.” Girls: gendered, always lesser, always weaker. Fake Geek Girls is an apt title, because the book addresses the many binaries that are in play in fan culture—and that have been codified by fan studies as a discipline.

And the binaries are many, and often actively placed at odds by media producers. Fanboy against fangirl. Creator against consumer. “Good” fan against “bad” fan, and against “bad” fannish engagement. But, backing up a little, fan studies does acknowledge that there are people who are not white, heterosexual, cisgender men between the ages of about 18 to 34 who are fans of things, unlike many people who create solely with that demographic in mind. In fact, fan studies acknowledges feminism, or at least how feminism plays into the engagement of female fans. This feminist lens, however, has not been consistently or even mostly intersectional—that is, fan studies has nodded to feminism through a white, cisgender, and primarily heterosexual lens. There is a lot to unpack in that concept of feminism alone.

Fake Geek Girls addresses the previously mentioned dichotomies and more, again, through teasing out the binaries as well as those places where middles and others are found. And it focuses on the binary pieces that have been named as by or for women, and how activities and engagement are coded female or feminized, and who supports that coding. This comes up in concepts of acceptance of or resistance to canons; authenticity or “selling out”; and questions about who is elevated to the role of business partner (through projects as wide-ranging as becoming employed by a media franchise or selling sanctioned merchandise), and who or what activities are relegated to an unpaid gift economy—and why. These theoretical questions come with real examples in fandoms from Star Trek to The Walking Dead, so fandom practitioners may run into a few of their favorite controversies.

Why examine these binaries? Well, there is a certain because: because fan studies itself has studied these binaries, and it’s worthwhile to reflect on how academic work itself may have contributed to the binaries in turn. And why focus on women’s experiences in fan culture? This, I think, a reader can intuit before it’s stated, and here I draw from the book’s conclusion: “…women are systematically alienated or rendered less visible within geek and fan culture.” (231) And if we can, as the author notes, think about “questions of identity and power,” we can hope for ever more inclusivity and intersectional work.

After reading this history of fan studies as much as examination of fandom feminism, I came away with questions. How has the shift from heavily text-based social media to more visual forms in the past view years reinforced affirmation of canons and creators? If I use a hashtag just to see what other people I don’t know are tweeting about a show, what are the inadvertent benefits and consequences? What role do or should fans play in open-ended serial franchises? When can it be useful or helpful to read the Goodreads reviews? And to what extent are my fannish actions feminist, and what do I owe feminism and other fans, if anything, in my media consumption?

Here’s an answer: I don’t know. Not everything. Not today, anyway. Heck, for all you know, I’m Jon Snow, never to know anything at all. But I have a few ideas, and I do know that I’m real, I’m a geek, I’m a girl, and that whether you align with all of those labels or not, your real geekiness should get to have a home in fandom. Fake Geek Girls is a trip through the reflection that has come so far—and still has so far to go.

Even though my fannish tendencies seem distant and inaccessible right now, I appreciate the reminder that my actions as a media consumer affect the production of media. I can request a book from the library or buy one. I can leave a review, or recommend a book to another reader. And these small actions give me immense power to support the publishing of stories I love and ideas I want to uplift. Today, that’s what I’m taking away.

Hallie Tibbetts has been involved with Narrate Conferences and its events since its inception in 2006, serving variously as education officer, communications officer, and vice president, along with chairing a number of conferences (including many years of Sirens). She works in editorial at Little, Brown Books for Young Readers on books for children age zero to eighteen, but doesn’t mind if grownups like those stories too.