Gillian Chisom: As an adult, I’ve wrestled so much with what it means to be the girl who doesn’t go back to Narnia

Posted on September 26, 2019 at 9:00 am | Comments Off on Gillian Chisom: As an adult, I’ve wrestled so much with what it means to be the girl who doesn’t go back to Narnia

Before this year’s conference in October, we’re getting to know some members of our Sirens community. In this attendee interview series, we talk to scholars, creators, professionals, readers, and more: about their love of fantasy literature, their current work and passions, why they chose to attend Sirens, and what keeps them coming back. We think you’ll find that our community is truly exemplary, and hope you’ll join us!

AMY TENBRINK: You are a PhD candidate researching gender and embodiment in the early Quaker movement. What appealed to you about chasing a doctorate degree? And about your particular research topic?

GILLIAN CHISOM: I’ve actually left academia recently, for a host of complicated reasons, but I was interested in pursuing historical research because I wanted to understand the lives of people in the past, and especially people who haven’t been included in many traditional historical narratives. Even though I’ve moved on from that part of my life, I still think that it’s tremendously important work, and I’m still passionate about telling stories that haven’t been told, or have been told in a way that excludes certain perspectives.

AMY: Two years ago, you presented “Cold as a Witch’s Tit”: Gender and Magic in Early Modern Witch Trials at Sirens. Tell us something we probably don’t know about witches—but really ought to!

GILLIAN: Based on the way early modern European witch trials often appear in pop culture, people tend to assume that witch trials were about men persecuting women who were rebellious or subversive in some way, but that isn’t entirely accurate. Women were accusing other women of witchcraft more often than not, which isn’t to say that witch trials weren’t reinforcing patriarchy, but it shows that women are often complicit in policing other women within patriarchal structures. Also, the women who ended up accused of witchcraft weren’t necessarily rebellious or subversive—they were usually just ordinary women who were in the wrong place at the wrong time, or who got caught up in some kind of local conflict that escalated beyond their control.

I think that part of the reason historians have struggled to come up with a singular explanation for the early modern witch hunts is that there isn’t one explanation—witch trials were usually rooted in very local circumstances, in the kind of village conflict that you have to understand in all of its particularity. There were larger forces at play, of course, but to understand a given witch trial you have to untangle the local before you can get to the big picture. Which is to say, I think that witch trials are significant because they give us a window into the kind of day-to-day problems and anxieties that early modern people were dealing with—it’s not an accident, for instance, that many witchcraft accusations arose in the context of pregnancy and childbirth, which were very vulnerable states for early modern women.

AMY: When did you fall in love with fantasy literature? What do you love about it? What about it do you find problematic?

GILLIAN: The Chronicles of Narnia were my formative fantasy series, so much so that I joke sometimes that C.S. Lewis programmed my brain. I think that the thing I fell in love with about those books was the sense of possibility—that there could be a door to a magical world anywhere. Of course, Narnia also illustrates some of the most problematic aspects of a lot of classic fantasy literature—sexism, racism, Christianity-as-default, and monarchy-as-default, just to name a few things! On a personal level, I have incredibly complicated feelings about those books now, even though I can’t escape the way they shaped me as a reader and a writer. I used to identify very strongly with Lucy as a child, and now I identify with Susan, fall from grace and all. As an adult, I’ve wrestled so much with what it means to be the girl who doesn’t go back to Narnia, who rejects the fantasy world but is also rejected by it, found wanting in some way. But there’s possibility, too, in that wrestling. I think that there’s so much to celebrate in the way that current fantasy authors are taking some of those problematic tropes and preserving the sense of possibility and deconstructing the rest, though of course we still have a lot of work to do.

AMY: You don’t write just epic scholarly tomes, you also write fantastical fiction—and you’re committed to centering queer voices in your stories. Recently, Sarah Gailey has written on what, to them, makes a story queer. What, to you, makes a story queer?

GILLIAN: I agree with Gailey both on the importance of casual queer representation and that representation alone isn’t the only thing that makes a story queer. I definitely resonate with what they said about wrestling with identity as a queer theme. In many ways that kind of wrestling has been at the core of my own experience since coming out; I’ve had to devote much of my time and mental and emotional energy to figuring out how to live with a version of myself that’s radically different than who I thought I was before. That type of struggle usually shows up in my stories in one way or another, though not always in ways that are obviously about sexuality. Found families also appear in almost all of my stories, and to me that’s also a queer theme—of course, queer people aren’t the only people who participate in found families, but in my experience there’s a lot of overlap there. Found family and community have also shaped my own experience as a queer person far more than romantic relationships, so that’s something that my work reflects. Queerness, in my experience, can carry with it the same breathless sense of possibility that fantasy literature itself does—the possibility of living and loving in unexpected and subversive ways.

GILLIAN: A friend invited me, and it just happened that the first year I came was also the year that I was really starting to struggle in grad school, partly because it was such a male-dominated environment. It was such a relief to experience this amazing feminist community where I could be my authentic, nerdy self. Sirens became my refuge from the stress and frustrations of academia, a space where I could revisit the creative, passionate parts of myself that I felt like I had to suppress in my professional life. Over the years I’ve gone through some major life transitions, and it feels like the Sirens community has been there with me every step of the way, reminding me that I can be the heroine of my own story. 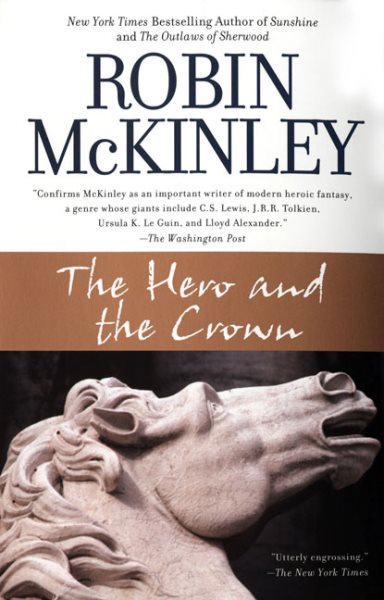 GILLIAN: There are a lot of possible answers to this, but the first one that comes to mind is Aerin from Robin McKinley’s The Hero and the Crown. McKinley’s work was another formative influence in my development as a fantasy reader—hers were the first fantasy books I read with female protagonists, and I’m grateful that they were available to me even though there are definitely some things I would criticize them for now. Aerin in particular stands out, though, not just because she was my first McKinley heroine, but because she had two romantic partners in the course of the book and she didn’t have to choose between them. I was probably about twelve at the time that I read it, and I’d deeply internalized the idea that there was only one true romantic partner for everyone, so the fact that this heroine I admired was allowed to love two different people felt new and radical. Also, McKinley connects Aerin’s ability to love two people with her ability to hold in tension different aspects of her identity without having to choose, and that was also a message that I really needed to hear at that time in my life.

Gillian Chisom is a recovering academic and writer. A lifelong fantasy reader, over the last several years she has wrestled with the genre’s flaws and possibilities and become committed to writing fantastical stories which center queer voices. She was a Lambda Literary Fellow in Young Adult and Genre Fiction in 2013, and her work has appeared in The Toast, Global Comment, and Specs Journal. In her spare time, she likes to make her own clothes.