Sirens At Home: How Tamora Pierce’s Books Saved Me from the Curse of “Not Like Other Girls”

Posted on October 24, 2020 at 9:30 am | Comments Off on Sirens At Home: How Tamora Pierce’s Books Saved Me from the Curse of “Not Like Other Girls”

If you prefer, we offer a video of Rebecca reading this essay: 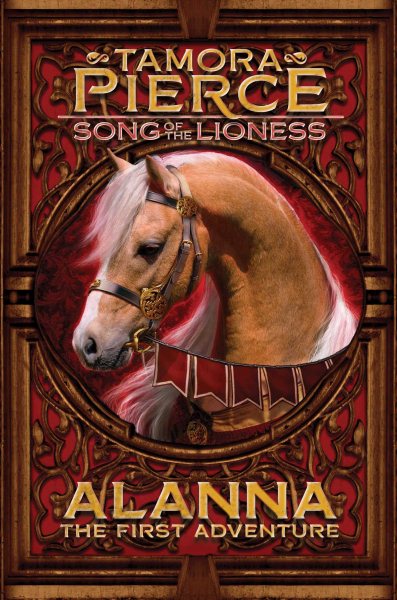 I grew up as an irrepressible tomboy who fell victim to the unfortunate misogynistic belief that I wasn’t like “other girls.” I roughhoused, played competitive sports, wore oversize jeans and t-shirts every day of my teenage years, and secretly thought of myself as better than the girls around me who wore dresses or nail polish. I was encouraged to be strong, healthy, smart, and athletic—and I was all those things. I heartily encourage those things. But what I didn’t understand as a child was that gender presentation is a fluid exercise, not an either/or situation in which anyone who chooses incorrectly (and in my mind there very much was an incorrect choice) is “shallow.”

There are lots of reasons for this, and I don’t mean to say that being a tomboy by definition means rejecting “other girls.” One of those reasons almost certainly was the fact that I grew up in a house without an adult female presence, and as a result, felt as though the door that unlocked the secrets of womanhood—whatever secrets those were—had been hidden from me. I considered myself an alien among girls, and over the years my feelings of superiority mingled with feelings of insecurity as I wanted desperately to know how the girls around me seemed to effortlessly understand things that for me, might has well have been written in a language I didn’t understand. (When I bought my first razor, I didn’t realize that electric razors needed to be charged, and ended up locking myself in the bathroom for close to an hour as my family was getting ready to leave the house. It was dire.)

Then I discovered Tamora Pierce’s Song of the Lioness series. 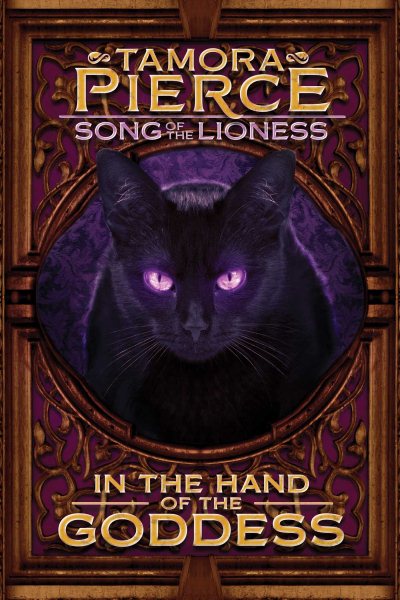 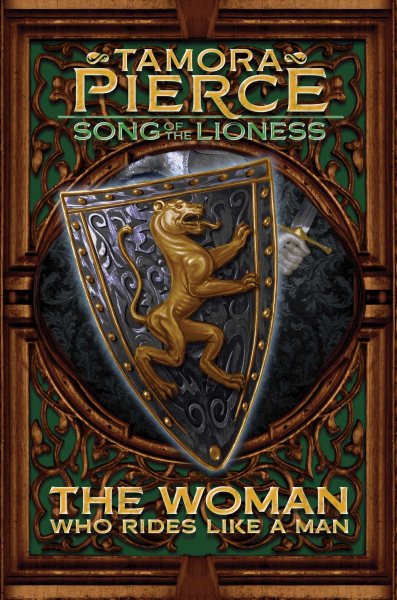 Most of you are likely already familiar with these books—so formative to so many fantasy readers in the 1990s—but for those who aren’t, here’s the brief overview. Alanna (a dedicated, smart, physically capable girl without a mother) is determined to become a knight in a kingdom where (you guessed it) only men can hold that title. So she pretends to be a boy and trades places with her twin brother so that she can take his place at court. I loved Alanna, and devoured the quartet whole. From Alanna I learned dedication and determination and how to stand just as tall as any boy. But I also learned lessons from several other female characters in the series, lessons that were more important than I realized at the time.

Once at court, Alanna does pretty well at being a knight, but struggles with aspects of traditional femininity. When she gets her period, she doesn’t immediately understand what is happening. It takes an older woman, the mother of one of her acquaintances, to explain menstrual cycles, pregnancy, and birth control to her. “The talk” is a common occurrence in the lives of people assigned female at birth, but the scene as depicted in Alanna: The First Adventure sent the message home to me that there is a wealth of wisdom in traditionally female domains.

One can certainly argue with many ways in which gender is presented in the Song of the Lioness series. Alanna in particular struggles mightily with her own lack of understanding of things that are coded female in the world of Tortall, as well as the fact that her livelihood depends on her being as good or better than the boys around her—even after she is knighted and has proven herself worthy, gender aside. The third book in the series is literally titled The Woman Who Rides Like a Man. (What does a man ride like? Why is “like a man” the gold standard?) 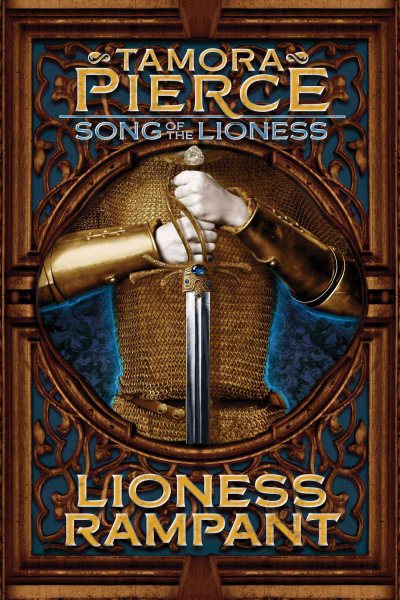 But later books in the series (and further series in the same world) begin to interrogate these boundaries. In Lioness Rampant, the final book in the quartet, Alanna encounters Thayet, a princess of a neighboring kingdom who is in desperate need of assistance. Though Alanna initially expects her to be a simpering princess (she is exceptionally beautiful), Thayet soon shows her principles and proves her own intelligence. She advises Alanna on romantic entanglements, refuses to be led anywhere by the nose, and, after marrying King Jonathan, founds the Queen’s Riders, a battle troop that accepts both women and men. Thayet is beautiful, intellectual, and formidable, a woman written into the world of Tortall in part to challenge Alanna’s—and my—assumptions about what a woman can look like and be. 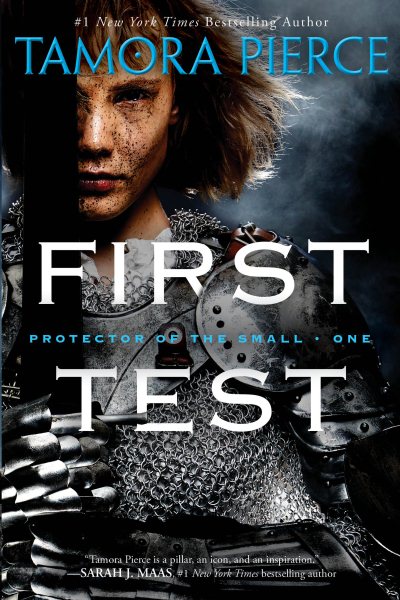 Further books by Tamora Pierce press further upon this issue. The third quartet set in Tortall, the Protector of the Small series, features Keladry, the first girl to apply to become a knight since girls have been allowed to join. Though she is similar to Alanna in many ways, Kel also spent several years of her childhood in the Yamani Islands, and trained with the noblewomen there in the use of the glaive and fan. Though in the Islands the weapons are meant to be used primarily for self-defense, the fact that noblewomen are expected to be competent with them helps deepen the gender portrayals in the world. 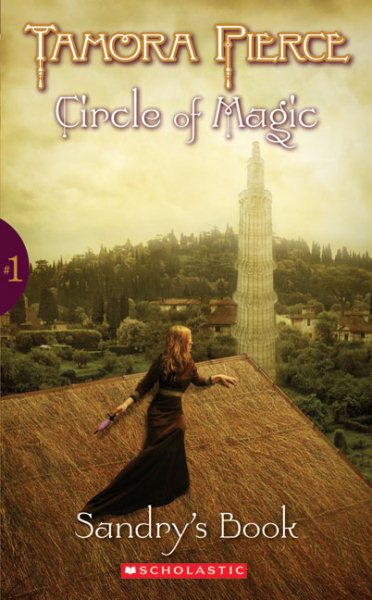 Going beyond the world of Tortall, Tamora Pierce also explores the idea of strength in the traditionally “feminine” in the Circle of Magic quartet, wherein three girls, a boy, and two crochety guardians are thrown together to form one of the best found family series I read as a child. The series is notable for the connections it draws between magic and “feminine” arts—Sandry’s magic is tied to threadwork, Tris’s weather magic is deeply tied to how in touch she is with her emotional landscape, and Briar (a boy) finds his magic in greenery and growing plants.

Power and legitimacy in the feminine. Like many books published in this time, Tamora Pierce’s work is not immune from criticism—of its portrayal of different races, sexualities, and even gender roles. But immersing myself in these stories still meant finding all sorts of female characters to respect and to emulate—warrior women, intellectuals, empaths; women who wore dresses and finery and those who did not; women of all sorts, all with their own individual power. Reading Tamora Pierce’s books provided me with a lens through which I saw and understood new ways of being female, ways that complicated the “strong female character” mantra I’d lived by without interrogating since childhood.

I wish it were so easy—that reading a book could immediately undo every impression of gender stereotyping and internalized misogyny I’ve ever experienced or perpetuated. But understanding the world and my place in it is the work of a lifetime, as are the choices I make every day in expressing my gender when I decide how to dress, what to put on my face, how to interact with the people around me. I’ve grown a lot from who I was as a child (I hope we can all say the same thing about ourselves!). I no longer make assumptions about someone’s seriousness based on how they choose to express their gender. Though I’m still a t-shirt and jeans sort of person, I sometimes wear dresses—and when I do, I don’t feel awkward about it. I’ve learned, and am still learning, a lot about internalized misogyny, toxic masculinity, and the fallacies of gender essentialism. And I can credit many of the books I read as a child, especially those set in Tortall, as opening the door. 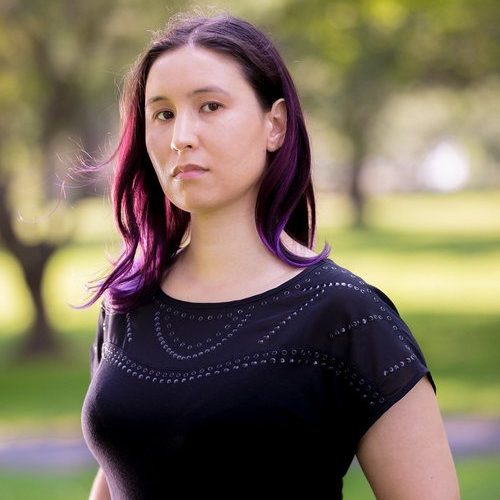 Rebecca Kim Wells grew up in California before moving east in search of crisp autumns and snowy winters. Her debut novel Shatter the Sky was a New England Book Award Finalist, an Indies Introduce selection, and a Kids’ Indie Next Pick. She is also the author of Storm the Earth and Of Blood and Briars (2021), published by Simon & Schuster Books for Young Readers. She holds a BA in Political Science from UC Berkeley and an MFA in Writing for Children and Young Adults from Simmons College. When not writing, reading, or talking about writing or reading, she sells books at a fiercely independent bookstore in Massachusetts. She can also be found drinking tea, singing along to musicals, or playing soccer. (Usually not all at once.) If she were a hobbit, she would undoubtedly be a Took.