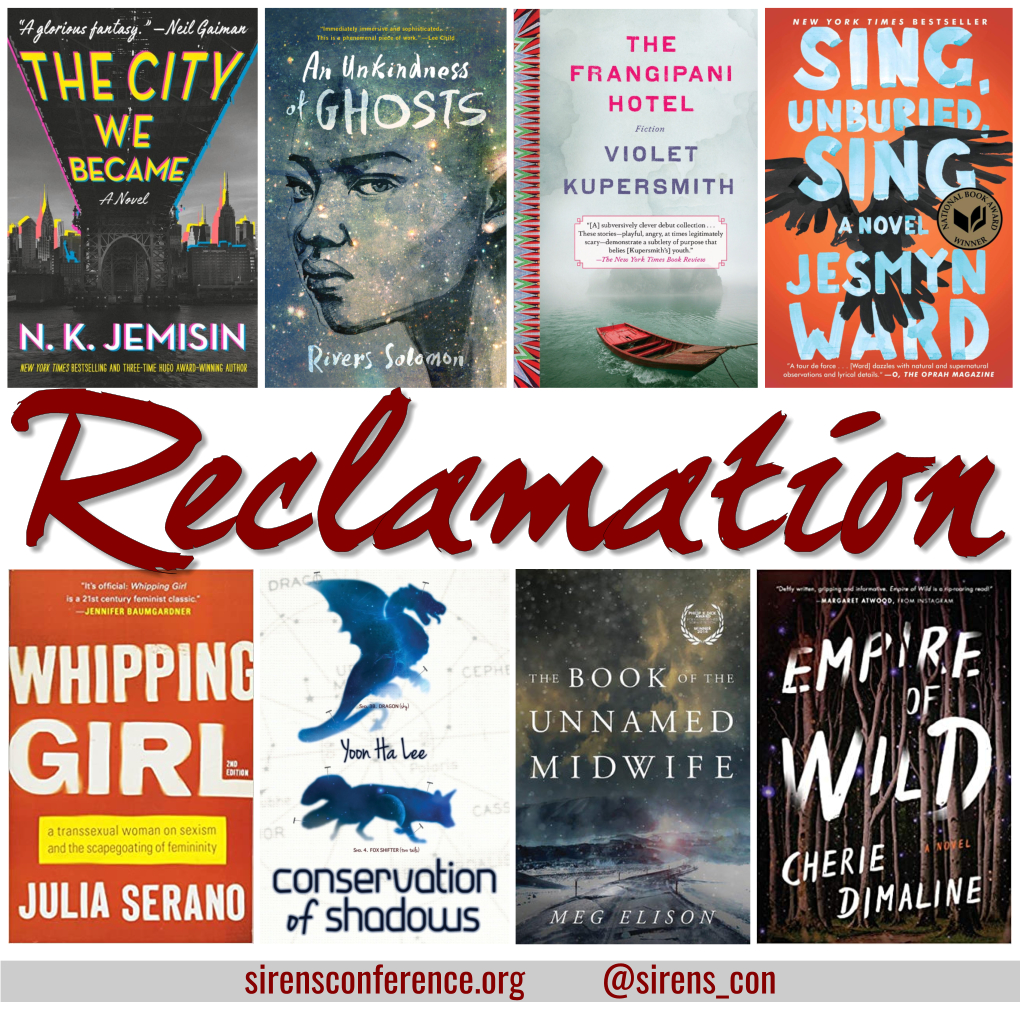 Not being able to gather in person with the Sirens community in 2020 was heart-rending. But it also gave us the gift of time: a chance, after more than a decade of work, to take a breath and consider what Sirens is today—and what we want it to be tomorrow.

Sirens is a conference that actively seeks to amplify voices that are pushing boundaries in speculative spaces—and specifically, are pushing those boundaries in the direction of a more inclusive, more empathetic, more just world. Since we featured works on this year’s villainous theme last year, this year’s Sirens Reading Challenge instead showcases 50 works by female, nonbinary, and trans authors that envision that better world—and we’ll explore what that means to us in a series of six posts, using those works as reference points.

We all come from somewhere.

Sometimes that somewhere is a physical place, a corner of a map inked indelibly into your hippocampus. A place that sounds like birdsong or smells like sugar or has a sky that’s that just-so blue. A tiny bedroom, a crook of a tree, a corner store, or a holy place. Where visiting means more than just visiting: It’s a flood of memory, a reversion to your childhood, or a feeling of overwhelming loss of what could have, or should have, been.

Sometimes that somewhere is a people. Your roots. Your drama-filled, fragile family, or a wider community, or a deeper legacy. Noisy cousins, grandma hugs, family friends you call “auntie.” Grace over a Sunday meal or knowing that if you don’t “come and get it” when you first hear the holler, there won’t be much left to get. Where “hello” can mean a thousand things, some of them warm and safe, others less so, or a stand-in for so much yet unsaid.

Or sometimes, that somewhere is a history. Knowing that you—in all your messy glory—stand on both the shoulders of those who came before, and the massive, weighty blocks of time. Family Korans, handed carefully down; black-and-white photographs of smiles, horrors, and truths; the strangest of idioms that everyone says but no one knows why. Shared understandings that mean that cooking is caretaking and embroidery is revolution and refusing to clean your house is an unfettered act of defiance. Where history isn’t full of reality so much as victor-written stories and erased legends, furtively shared writings and undercurrents of bastardized tales.

We all come from somewhere.

But so often, as people of marginalized genders, we have to actively reclaim what it means to us, only us, to come from somewhere. To be born of a place or belong to a people or built on a history. Because others have taken, and will keep taking, that from us—whatever it means for each of us to be from somewhere—and turn it into something breakable, something ugly, something unrecognizable.

And so, in the speculative space that is Sirens, our first mission statement is reclamation: to find and share those stories that reclaim what it means for us to be from somewhere.

That speak to where we are from, and in doing so, offer a wholly new path for our future. Tales that unearth our pain, the prisons forged of our stolen stories, and use that light to set us free. Works that lay bare past injustices, the white heteropatriarchal foundations of our societies, and use the most delicate of seeds to create something new: our history made honest, perhaps, if not fair, or pointing us toward a direction of hope.

Both Rivers Solomon and Jesmyn Ward have crafted tour de force works that reclaim the Black history of the American South, but in wildly different ways. Solomon’s An Unkindness of Ghosts reimagines the stratified plantation of the antebellum South as a spaceship, with Black, queer, autistic Aster performing backbreaking work among Black and brown folks on the lower decks. Solomon’s craft illuminates the stark dichotomies of comfort and labor, control and cruelty, and in doing so tells a raw, painful story of structural racism and collective trauma.

In contrast, Ward’s contemporary haunting, Sing, Unburied, Sing, reclaims the American South by also claiming the American road trip: A Black woman packs her kids and a friend in the car and heads north to pick up the children’s white father upon his release from prison. But the infamous, maximum-security Parchman is haunted by the ghost of a 13-year-old boy, the inescapable legacy of slavery and brutality. Fueled by the loss of the post-Katrina diaspora and Ward’s relentless critique of the American carceral system as the modern progeny of slavery, Sing, Unburied, Sing tells the truth of America.

Violet Kupersmith’s collection, The Frangipani Hotel, examines history as well, in this case a history fraught with war and displacement, so much fear and a stubborn determination to reclaim a culture from the aftermath of American aggression. Kupersmith’s work is born of her mother’s fleeing Vietnam after the fall of Saigon, her grandmother’s folkloric tales, and her own time in a Vietnam still rising after a millennium of occupation. The result is The Frangipani Hotel, a collection of sometimes terrifying, sometimes welcoming, always all-too-human ghost stories about a people emerging from the shadow of war.

Yoon Ha Lee also addresses war in his collection, Conservation of Shadows. But Lee uses his mastery of the short-story form to insistently reclaim the muddy awfulness of war from thousands of years of a shimmering veneer of grandeur. Lee’s protagonists are clever and determined, but so very fallible, propelled by duty and sacrifice, sometimes drowning in horror. Whether with spaceships or dragons, with far-flung science fiction or ancient myths, Lee always finds a way to reclaim our humanity from not only the specter of war, but our insistence on draping it in glory.

In the desolate, dystopian world of Meg Elison’s The Book of the Unnamed Midwife, a fever has, by making childbirth an even more deadly endeavor, decimated the world’s population. Through the eyes of the unnamed protagonist, determined to navigate her new, precarious reality, Elison reclaims the violence inherent in the stories of everyone of marginalized genders, interrogating our relationship with power and our fang-and-claw attempts to survive. Because as Elison asserts: If humanity is to be reborn, someone must be its guide.

Cherie Dimaline’s Empire of Wild is both a reclamation and a warning. With inspiration from the Métis tale of the rogarou, a vicious creature that is part-human, part-dog, Dimaline’s supernatural fable tells the story of what the ills of patriarchy, colonialism, and capitalism did to her land, her people, and her history. Set in Métis lands in northern Ontario, this haunting tale explores just what tears loved ones apart, and the lengths a woman will go to get them back—even if the monster they face, as Dimaline hints, is insurmountable.

In Whipping Girl, biologist and trans woman Julia Serano also reclaims her space and her story, and in doing so, the spaces and stories of other trans women. Though this work is older and some language is dated (the second edition provides context in its preface), Serano’s smart, thoughtful exploration of themes such as transmisogyny and the disparagement of femininity serves as an urgent reminder that so many people of marginalized genders must insistently claim their own space in the world each and every day.

Finally, N.K. Jemisin’s The City We Became is perhaps the most speculative of all these works, if only because it seems intent on reclaiming speculative fiction from its own white heteropatriarchal bullshit. In Jemisin’s contemporary work, New York has just awoken. It—and its vibrant, bustling people—have created the momentum necessary to transform it from a city to a city, an indelible place with its own sentience. But infant New York needs a cross-section of spectacular New Yorkers to save it from Lovecraftian invaders: asshole Manhattan, artistic Bronx, ferocious Brooklyn, striving Queens, and even insular Staten Island. In this dirty, chaotic, joyous, ambitious, in-your-face work, Jemisin plays by no one’s rules but her own.

This post is the first of a six-part series on Sirens’s mission. We will update it with links when all posts are published.