Posted on May 6, 2021 at 9:00 am | Comments Off on Heartwood: Non-Binary Tales of Sylvan Fantasy edited by Joamette Gil 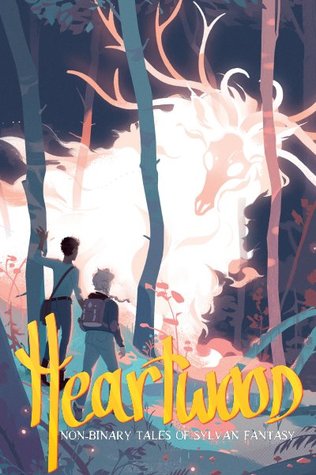 – “Into the Woods,” lyrics by Stephen Sondheim

Not being a noted fan of fairy tales, and not having participated in the Kickstarter for Heartwood: Non-binary Tales of Sylvan Fantasy, edited by Joamette Gil, it took me a rather embarrassingly long time to work out why the comics in this anthology by non-binary creators all centered on the woods. The woods have been a space of transformation and potential in stories for centuries, as the Sondheim lyrics that I couldn’t stop thinking of while reading this book indicate. This collection, which is delightful overall, extends that potential to the creators it includes and to the characters in its stories, many of whom are non-binary themselves.

“Sylvan fantasy” is a broad category, and the stories in Heartwood vary from contemporary settings, like the opening “The Biggest Dog You’ve Ever Seen” by Z. Akhmetova, to fully secondary world settings, like “New Leaves” by Emily Madly and Maria Li. Most treat the idea of the forest as literal, but in at least one comic, Rhiannon Rasmussen and Chan Chau’s “Dive,” the forest is either metaphorical or a forest of seaweed. (Partly because it played with the concept, that one was one of my favorites.) “Finding Alex,” by editor Joamette Gil and Corey Ranson, takes the brief for the collection very literally indeed—and the story, in which the main character asserts their non-binary identity through a strange encounter in the woods, works beautifully.

One of the standout entries in the collection, “Shuvah (Return)” by Ezra Rose and Jey Barnes, gives that same plot a very specifically Jewish twist, as the protagonist returns to the woods to find the same forest beings with whom they celebrated Sukkot as a young Orthodox child, and celebrates Tu B’Shevat with them as a non-binary adult.

Indeed, one of the strengths of this collection is its showcasing non-binary protagonists in a variety of ways—whether in stories revolving around their being non-binary, or stories in which they have adventures like any other fantasy protagonist.

Having both together elevates Heartwood out of the potential danger zone of being a gimmick to being a fun, relevant comics anthology with a lot of heart.

Heartwood is a beautiful book, particularly its gilt-edge pages and foil lettering on its gorgeous cover, but the black and white printing unfortunately does render some of the comics hard to distinguish at times—I suspect some if not most of the submissions were originally full color. Those comics like “Dive” which were clearly conceptualized for monochrome printing stand out for their crisp lines and clearly differentiated tones. In terms of art style, most of the comics in the collection are on the more conventional end of the gamut of comics art; the more schematic, “Hyperbole and a Half”-esque art of Polly Guo’s “Paloma” is probably the most different from the rest. But even though the anthology includes twenty-two stories, none of them feel rushed, and none of them are obviously less technically accomplished than any of the others. These creators know their stuff, and it shows.

All in all, Heartwood is a strong entry from Power & Magic Press, living up to its stated mission of showcasing the talents of non-binary comics creators and the press’s mission of providing a home for thoughtful genre content by queer creators and creators of color. If you haven’t had much experience with the current flowering of indie comics, Heartwood is a great place to start. I’ll definitely be looking forward to future anthologies from Gil and P&M Press.

Dr. Andrea Horbinski holds a PhD in modern Japanese history with a designated emphasis in new media from the University of California, Berkeley. Her book manuscript, “Manga’s Global Century,” is a history of Japanese comics from 1905–1989. She has discussed anime, manga, fandom, and Japanese history at conventions and conferences on five continents, and her articles have appeared in Transformative Works and Cultures, Internet Histories, Convergence, and Mechademia.