2019 Books and Breakfast: superheroes come in all sorts of bodies

This year, as we interrogate what it means to be a hero and what actions are seen as heroic, our Books and Breakfast program features titles in four areas to broaden our definition of heroism: religion, race, gender/sexuality, and body—and please note that some titles sit on multiple axes, not just the one they’re listed under! We’ll be highlighting all of these titles this summer: You can read more about our religion picks here, our race picks here, and our gender and sexuality picks here; below are our Books and Breakfast selections exploring heroism and differing bodies, because it’s not all about ripped abs and bulging biceps.

If you ask a random sampling of people on the street what they think a superhero looks like, you’ll probably get a lot of expected answers: protein-shake muscles wrapped in a package of lycra and latex, bulging at the seams. Even our superheroines often suffer the same fate, though they notably get much less lycra and latex to work with. We’re so bound to the notion that superheroism looks like Superman or Batman or even America’s ass that sometimes we need to stop and ask ourselves, quite literally: What if it didn’t? Our Books and Breakfast body picks propose alternate heroes: in Faith: Hollywood and Vine by Jody Houser, Francis Portela, and Marguerite Sauvage, an overweight superheroine saves the world as we know it; in Gullstruck Island by Frances Hardinge, an anxiety-ridden girl with a neurodivergent sister who becomes the hero her people needs. 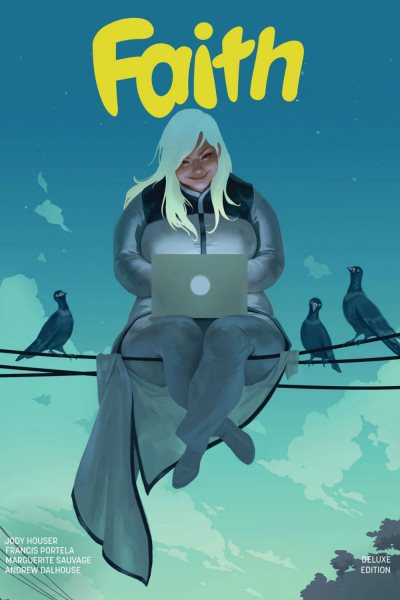 Faith, as a character, got her start in Harbinger, the Valiant comic about a group of outcast teenagers with superpowers. As author Jody Houser explains, “[S]he’s the one person in that group who was super-excited about having superpowers, because she’s a big fan of comics and sci-fi and fantasy… [s]o, she had a very strong sense of who she wanted to be as a superhero.” In Hollywood and Vine, Faith is an adult who has moved on from the group of outcasts and is living on her own, donning a wig and glasses for her secret identity as Summer, a journalist.

You don’t need to have read Harbinger to be able to follow Faith: Hollywood and Vine, authored by Houser and illustrated by Francis Portela and Marguerite Sauvage. Faith’s backstory, including that she was orphaned and raised by her grandmother, is quickly summarized at the start before diving into her perfectly average, perhaps even boring secret identity. As with many new series, the first issue of Faith is mostly setting the stage and grounding us in Faith’s daily life. The second issue introduces a potential villain while fleshing out a bit more of Faith’s personal history. The third issue shows Faith in action fighting the baddie, but also gaining more allies when her cover is partially blown, and the fourth is the big battle with the villain.

What’s really new and fresh about this graphic novel is that the main character is both plus-sized and comfortable with her body. For example, while her ex wanted to be in the spotlight doing reality television, Faith chose the path of a secret identity in the hopes of quietly doing good. She isn’t pining for lost love, but rather disappointed in the life he’s established since she left him—which is great because then when we meet his stereotypically thin and airheaded new girlfriend, Faith isn’t focused on weight and looks, but rather what it means to be a superhero. Throughout the graphic novel, Faith’s weight isn’t negatively cast or even something she has to “deal with.” Instead, Faith’s struggles are centered around trying to fight crime while establishing a new independent life. 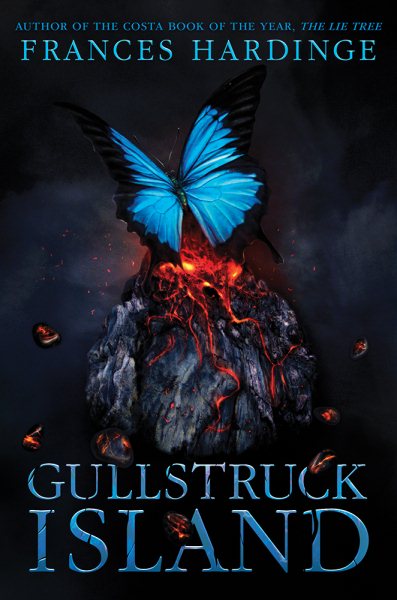 In the ordinary way of things, Hathin of the Hollow Beasts tribe of the Lace would never be the protagonist of her own story. Hathin is the younger sister of Arilou, the only Lost born to the Lace on Gullstruck Island. That status makes Arilou a profitable rarity and Hathin an indispensable figure in her tribe, young as she is, for she was born for the purpose of caring for Arilou. But the Hollow Beasts are not actually sure that Arilou is a Lost: There is precious little evidence that she is consciously sending her senses outward independent of her body like a true Lost, rather than just someone whose intellectual disability makes her seem like a Lost. Not everyone on Gullstruck is content with the supremacy of the Lost Council over the governors of the colonial bureaucracy, and when all of the Lost but Arilou turn up dead one unremarkable night, Hathin, Arilou, and all of the indigenous Lace tribes find themselves caught in a deadly conspiracy. Hathin must keep Arilou alive when all the rest of their tribe have been slaughtered: She joins the Reckoning, the semi-legendary Lace group of revengers, and finds herself contending with volcanoes, towners, other Lace, and the Nuisance Control Officer Michard Prox, who may himself be a pawn of more central, unseen forces at work on the island. The uneasy status quo that prevailed since the Cavalcaste colonists’ arrival two hundred years before is shattered, and Hathin and Prox become the fulcrum of irrevocable change.

In the ordinary way of things, Gullstruck Island would be Arilou’s story and Hathin would be lost to history, unnoticed and voiceless. Instead, Hathin finds herself holding the entire island’s future in her small hands. If Arilou’s challenge is that she is too often not present enough in her own life, Hathin’s is that she is too present: Called a worrywart, she is prone to bouts of near-debilitating anxiety in her role as Arilou’s voice and keeper, anxiety that only increases when both sisters are forced far outside their comfort zones. Hathin even worries that she isn’t bloodthirsty enough to be a proper revenger, compared to her fellow members of the Reckoning. And yet, she couches all her worries in terms of their impact on Arilou, not realizing that she, rather than her Lost sister, is the protagonist of her own story.

Gullstruck Island is the story of a girl shaking off her self-imposed habit of self-denigration in the shadow of her gifted sister, of a society wracked by racial distrust teetering on the brink of genocide: The Lace are termed an “infestation” in their own ancestral land, rounded up into concentration camps, their families separated—concepts that seemed remote when the book was published in 2009 but which are all too relevant in 2019. It is a story about colonialism, about grappling with the poisonous legacies of the past and the need for systemic change, about a malicious dentist whose soul is bound up with a bird, about a family of volcanoes whose torrid passions for one another have ruinous effects on the island’s human inhabitants. And it is a story about a small, anxious girl who learns to consider herself apart from her sister, who does not set out to be a hero but who, by right of revenge and by virtue of being ignored but observant all her life, winds up being the quiet, unassuming, effective hero that her island needs.